I hate to say good-bye to the Tufa, but this is the way to do it. 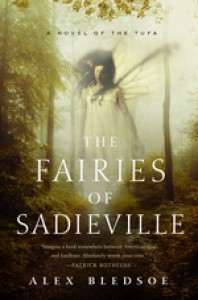 For many years [the Tufa] were on the wrong side of the South’s color line, and suffered for it. Their secretive ways and legendary musical aptitude spawned rumor and legend, which in turn prompted more and more withdrawal.

But now the twenty-first century, with its pervasive interconnectedness, pushed against this isolation. More and more Tufa risked the consequences of leaving and sought their way in the world. They all knew they would someday have to come back, since all Tufa were inextricably tied to Needsville. But they also knew that the seclusion of the past was no longer practical. Like it or not, the world now knocked on their door.

Such a depressing thought, but a pretty good summary of the State of the Tufa.

I still remember some of the reactions I had back in 2011 during my first read of The Hum and the Shiver and met the Tufa. There was something otherworldly, ethereal and haunting -- and yet, very human, and even fun. It was, in short, magic. I thought the same when I re-read it before the sequel, and maybe it impressed me more that time. Each book since has felt the same -- not all have them as successful as the first, but they've all had that same core magic.

When it was announced a couple of months ago that this was going to be the final novel in the series I was struck by two thoughts -- the first, and strongest, was lament. The second was, "how?" There's not an overarching narrative that needs tieing up, a goal to meet or anything. Partway through this book, I started to understand how Bledsoe was wrapping things up and concluding the series -- and it felt perfect. I should add at this point that I was wrong about what he was doing, and that the reality was better than my guess.

As it's the final book, all bets are off -- the first novel contained many hints about the nature of the Tufa, but the successive books were less and less subtle in that regard, and ended up telling more than the previous. At this point, there's no hinting, no suggesting -- not only that, Bledsoe answers many questions readers have had since the beginning, and probably a few we should've had. And he does so in a way that enriches the series and the Tufa, not just something that reveals. There were so many little tidbits that came out that just made me smile or utter a quiet "Ah ha!"

I actually haven't talked much about the plot yet -- how odd. There are a couple of graduate students from a university in Tennessee -- one in psychology (would be parapsychology if she could get away with it) and one in English with a focus in folk music as a way to improve his own music (minor spoiler: I spent a few pages waiting for him to be revealed to be a Tufa -- nope, just a kindred spirit). These two have come across an old film -- silent film old -- shot near Needsville, showing a young woman losing her glamour and flying off on wings. There's no way that it could be silent film quality FX, it's a woman with wings. This town it was filmed in, Sadiesville, disappeared shortly afterwards. The two want to find this town and explore what happened to it.

Which brings them into contact with the people of Needsville -- and the night winds have instructed them to help these two find what they're looking for, despite the fact that no one in Needsville has a clue about the town. For readers, the idea that Tufa have forgotten anything that happened in their area is pretty astounding the kind of thing that piques your curiosity.

What happens next is wonderful, and horrible, and beautiful -- awful in every sense, archaic and otherwise. I loved it and hated it while admiring how Bledsoe played this out. Structurally, tonally, thematically different from the rest (as each book in this series has been), yet undeniably part of the series. I loved seeing friends who've been around since The Hum and the Shiver or those as fresh as Gather Her Round just one last time (not that the new characters are slouches. For example, Veronica, our aspiring parapsychologist, is someone I'd hope to see if there was going to be a book 7).

There are a million little touches here -- none of which I can talk about without ruining something, that make this good-bye the best installment of this series since The Hum and the Shiver. This is a must for Tufa fans (not that they need me to say it), and one more chance for me to suggest that people who haven't started the series yet get on it. I don't believe in actual magic -- but Bledsoe's series make me want to, especially if it looked like this. I hate to say good-bye to this series, but this is the way to do it.