This is strange, bizarre, funny, tragic and will make you say "ew" a lot. 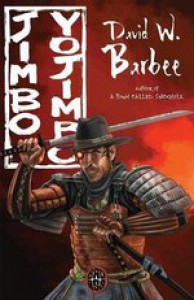 "Ready to make it official?" said his father.

Jimbo closed his cuttlefish eyes and prayed the revenge vow.

Let me kill ‘em, he thought. Let me exist only to punish them that wronged me, for such is the pain of my life that only the pleasure of their death will weigh it equal. Amen.

"Now that's what I'm talking about," his dead father said.

Who doesn't like a good revenge story? Especially one featuring swords and blood and gladiator-like battles, and surgically-enhanced hybrid warriors, and warlord chefs, and . . . oh, man. I don't know how to summarize this one, I really don't. So let me just steal from the publisher:

From the author of Bacon Fried Bastard and A Town Called Suckhole, comes a countrified samurai epic in the vein of Squidbillies if directed by Akira Kurosawa.

A flood of frogs drowned the cities and gunked up all the guns. Now an evil restaurant chain called the Buddha Gump Shrimp Company rules a finger-licking shogunate of seafood mutants and murderous redneck swordsmen like Jimbo Yojimbo. Jimbo wants revenge on the Company for killing his family and stitching a cuttlefish to his face. After a daring escape, he will hack his way through hordes of crawdad soldiers, a church of quacking gun nuts on a jihad, and Bushido Budnick, the master chef who rules them all. But with every step he takes, Jimbo Yojimbo's sweet revenge will surely begin to taste like shit gumbo.

I've read plenty of imaginative works over the last couple of years where I asked myself "what did I just read?" Typically, that was because as imaginative as the novel might have been, the author didn't relay the information too well and I just couldn't follow it (I usually didn't feel like I missed much). With this book, every time I asked something like, "Did he just say this cult was called the Holy Quackers?" I'd have to answer with, "Giant figures, wearing tattered camouflage kimonos and rubber boots, with giant duck bills on their face? Yup, he did say that." As strange, as out there, as bizarre as the trappings got -- the story made complete sense. It wasn't overly complicated, it wasn't overly messy, it was really a straight-forward revenge tale. Just one that felt like it was the offspring of any two randomly selected sentences from My Cousin, My Gastroenterologist.

Strip away everything and you're looking at a tale of a guy who was betrayed by his wife and watched his father be butchered by a megalomaniacal dictator, who just wants to rescue his daughter from that dictator's clutches (and, sure, maybe overthrow the government while he's at it) while being pursued by his wife and his arch-enemy (who happens to be fixated on his wife, too). It's a basic story, decently developed and told -- effective enough to entertain. But, once you add in the humor, the voice, the panache, the multiple cults, the hybrid warriors, the very strange world all this takes place in -- and the tale becomes dazzling.

And you buy it -- you buy all of it. Including the fact that Bushido Budnick can create entirely new species in his lab, but can't figure out how to take guns work anymore because science is hard or something. I'm not even sure it's that your disbelief is suspended, the book's just so cool that your disbelief says: "Who cares? I'm not Neil deGrasse Tyson. Just turn the page 'cuz I want to see what's next."

The fight scenes are disturbing, and bloody and . . . you'll say "ew" frequently. There's one fight near the end that just might be the grossest thing I read in 2018. There's another that's as close as you'll get to the Bride v the Crazy 88s in The House of Blue Leaves in print (just with robots, warriors with crawdad claws for hands, a samurai with sea anemones attached to his head in place of hair, and so on).

I'm tempted to just list off some of the stranger and/or cooler ideas that are given life in these pages, like the cult that "worshipped ideas and facts, and their relics were strange, ancient items that had mostly turned soggy in the flood: books. . . building a small army of highly literate and lethal fanatics dedicated to discovering and protecting that which would outlive them all: the untouchable truth of knowledge." But I won't -- just trust me, there are plenty. This book is like the Mos Eisley cantina scene -- something strange and interesting to look at everywhere, with a bit of violence and a bit of business going on in the midst of it all.

I'm in danger of going on too long here and I'm pretty sure I'm repeating myself -- if you like bizarre settings, stories told with panache and boldness, and don't mind a good bit of violence along the way -- get this. David W. Barbee is the real thing, I've got to get more of his work soon.

Disclaimer: I was provided a copy of this in exchange for my honest opinion -- I greatly appreciate it (the book wouldn't have appeared on my radar if not for that), but it didn't make an impact on my opinion (beyond giving me something to have an opinion about).