Annie skates her way back into adventure 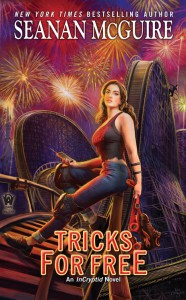 There are people who say you never really escape from high school, you just keep finding it in different forms, over and over again, until it finally kills you. Those people are assholes, and should not be allowed in polite company. That doesn’t mean they’re wrong.

Whenever possible, frequent/regular readers know, I like to start off these posts with a quotation from the book that sums up the feel, the character, or just makes me smile. I couldn't decide this time what to go with, so I used both -- one from a flashback to high school which is just perfect for everyone who views it as something they survived, and the other that captures Annie's voice oh-so-well.

Because of [Spoilers Redacted] at the end of Magic for Nothing, Annie's on the run and on her own. Her family doesn't know where she is (and hasn't heard directly from her to keep it that way), her friends know nothing -- she doesn't even have a single Aeslin mouse with her. She could not possibly be more alone in the world. She lucks into a job at Lowryland -- an amusement park near DisneyWorld -- thanks to running into a teammate from high school who is an executive there. It's not a glamorous job -- she works in knick-knack shops, does clean up, works in food kiosks, etc. for far too little money. But there's enough people around that she can hide in and almost no spell or anything the Covenant (or anyone else) tries to use to find her will work in that setting.

She's living in the employee apartments near the park with a couple of cryptids. One is from her old Roller Derby team, who, as luck would have it, started working for Lowryland around the same time. The other roommate is a Pliny's Gorgon, working as a resident at the Lowryland hospital. Tying this book back to Half-Off Ragnorack is a nice touch (and works out well for other reasons). It's not the best life, but she's content enough, she's safe enough, and there are good people in her life.

Until things start to go wrong at the park, some magic users discover that she's hiding there (they're also hiding from the Covenant, so that works out), and people are getting hurt. Making this a question of can Annie stop whatever's going on at the park without revealing herself to the Covenant and putting her friends in danger?

So there's the setup -- does McGuire pull it off? Yeah, stupid question. She does and she does it well.

First, she nails Annie's emotional state -- probably better than she does Verity's often. Annie's in a very vulnerable place -- emotionally, psychologically, physically -- and you can feel that.

I went very still as it struck me that, tight now,l was living like a cryptid. l was hiding from people who wanted to do me harm as much because of who 1 was as because of anything I’d done. That was normal -- being a Price meant I‘d had a bounty on my head horn the day l was born -- but the isolation that came with it was new. The need to view everyone around me as a potential danger, to hide, it was all new, and it burned. There were dragons working all over Lowryland, and while none of them were part of my personal clique of Mean Girls, none of them knew my name either. It wasn’t safe. It might never be safe again, not until we’d found a way to end the danger posed by the Covenant -- and that was something we’d been trying to accomplish for generations.

That vulnerability runs throughout this book -- even when Annie's at her most "rah-rah, we can do this, team" she's very aware that everything is seconds away from disaster. This brings a richness of character to Annie that Alex and Verity don't have (at least not to the same extent), if you ask me, this brings Annie into Toby Daye territory and elevates this series as a whole because of it.

You may have noticed a repeated use of the word luck above -- that's purposeful. Luck, as a concept, permeates these pages. It's not a very clear concept to most of the characters, but it gets clarified by [Spoilers Redacted]. As one more magical system in this world that has a variety of them -- that overlap, run parallel, and make a general mish-mash of things, it's great. I think it's a clever addition and I enjoyed watching it play out here, and anticipate continuing to affect things down the road.

The major flaw comes in how Annie pulls things off -- in humble opinion. Throughout the book, there's a warning given Annie -- don't do X. Beauty isn't supposed to go in that part of the castle, Egon warns Ray and Venkman against crossing the streams, Annie needs to not do X. You know that all of those things will end up happening before the story's done. Here's my problem: it's too easy for her to do it she makes the choice too quickly -- and I'm not sure it was necessary when she did it (it may have been, this may have been a rare-stumble for McGuire where she didn't make it clear that things were just that dire). I do know that if it's something Annie felt the need for here, Verity sure should've done it back Chaos Choreography. But whatever, I'm over it -- I just want to see how it plays out in the future.

One highlight for that I really can't get into without ruining the first twelve chapters -- but there's a conversation in Chapter 13 catching up every character in Annie's little circle with who's who, what's going on right now and since the last time they talked (hours or months ago), etc. This conversation just might be my favorite thing of March -- reading or in Real Life™ -- and it's been a very good month. It's just a pure joy to read.

By the way, the lack of Aeslin mice absolutely is felt throughout the book -- the absence is supposed to make things feel strange, and it does. But never fear -- there's a novella starring the mice from Magic for Nothing at the back of this book. I hope when I have time to read it that it makes up for their absence.

This is a great addition to a very fun series that adds some good depth to things, sets up our characters for a lot of trouble, and moves the series' story as a whole down an interesting path. The next book also features Annie, but I'm sure we get back to Alex or Verity soon, and I can't wait to see how these books without them affect their lives.