A compelling thriller that I have some issues with 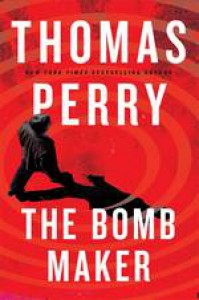 Oh man . . . this brings me back to the conflict I felt trying to discuss Sarah Pinborough's Behind Her Eyes. This is a heckuva read until it's not -- but we'll get to that in a bit.

I know precious little about Bomb Squads, and have read precious little about them. I think Crais' Demolition Angel is the only other book with a Bomb Tech in it for more than a few pages that I've read. So I was pretty excited to give this one a shot -- incidentally, I do think there are areas of overlap between this book and Crais' that'd make for interesting reading. Sadly, it's been about 15 years since I read Demolition Angel, so I won't be writing that. Still, my main point is that there's not a lot written about Bomb Techs, and that seems pretty strange, because this kind of thing makes for some great tense moments -- the kind of thing that thriller readers love.

What we have here is a guy, never given a name, or dubbed with one by the media that we'll call "the bomb maker." We know nothing about him at the beginning, and learn only a little about him later on -- for some reason, he's decided to kill off every bomb tech in LA. And he does so by making bombs designed to sucker the Bomb Techs into doing X or Y, which will both set off the bomb itself. In his first attempt, he kills half the division -- 14 of 28, including the commanding Captain.

What's the LAPD to do? Thankfully, one of the Deputy Chief's knows a guy -- the last guy to command the Squad still lives in town, running a high-priced security firm. So the Chief recruits Dick Stahl to come back and help the LAPD through this time. Stahl knew most of the people that died, trained many of them himself and would like to help get some justice for them and prevent others from joining them.

So begins a great cat-and-mouse game. The bomb maker is pretty smart and knows how Bomb Techs think, so he fools them into setting bombs off. Stahl doesn't know much about the guy beyond that, so he goes out of his way to overthink the bombs and finds the tricks that were included and thinks around them. Some of the squad start to think like him, and others don't. You can guess how that works out for all involved. The bomb maker sees how Stahl is figuring him out, and steps up his game, making bombs that are more clever and more devastating.

This aspect of the book -- which really is the bulk of it, thankfully -- is just great. Perry could've given us another 100 pages or so of it and I wouldn't have complained.

There's a little bit romance between Stahl and someone, which complicates things and could've bery easily annoyed me because it seems so extraneous. I think the way Perry dealt with it and used in to tell his story ended up working, but I'm not going to argue with anyone who was bothered by it (I easily could've been). But for me, when you add these complications into the cat-and-mouse thing, it just makes for a better read.

Which is not to say that this book doesn't have its share of problems. We get a lot of backstory on a couple of incredibly minor characters. There's one character whose sole purpose is to find a bomb and call the police, yet we get a lot of detail on the career she gave up, why she did so, and what that costs her to this day, just to have her find a bomb. I liked the character (what we got of her anyway), her part of the book was well-written, but it seems silly to get that much detail on someone who disappears almost immediately. It's like on award shows when they introduce a minor celebrity just so they can come on stage to introduce the award presenters. It's just pointless. Perry does this kind of thing more than once here, meanwhile we don't get a lot of information about most of the Bomb Squad members we do get to see do things. It makes little sense, adds little, and ultimately detracts from the suspense he's building. I don't get it.

One thing for sure, I add mostly as an aside, between the mysterious bad guy in Silence and the bomb maker here, I'm sure that Thomas Perry can write a great creep. Not just a bad guy with no respect for life or property or whatever, but a real cad who should never be allowed near a female. I'm not suggesting that describes all of his characters, just some of them -- just the fact that the paid assassin is a step-up for Sylvie Turner (also from Silence) compared to the previous guys she was serious about says something about the kind of creep Perry can write.

I'm going to get close to a spoiler or two here, so feel free to skip this paragraph. If you're still here, in the last 40 pages (less than that, actually, but let's keep it vague), this becomes a different kind of book. It feels like Perry realized what his page count was and wanted to keep it below 375 so he had to bring the cat-and-mouse thing to an end. The action kicks into high gear, and the very intelligent thriller throws out the intelligence and becomes a couple of action sequences. Well-done and compelling action sequences, but a very different feel from the rest of the book. He also switches from giving us too much detail (like the life story of the lady who found a bomb) to giving us almost no information to help wrap up the closing events of the novel. I won't even begin to talk about the last four pages, the final chapter almost doesn't belong in the book -- it does give us a teeny bit of resolution, but again, feels like a different book than what had come before. My kids can testify to this, I was yelling at the book during the final few pages, because I just didn't get what Perry was up to.

This was a solid, smart, compelling thriller about the kind of characters you want to read about -- smart professionals, acting for the public good and for the sake of their teammates up against smart professionals out to do wrong. I had a blast with most of this, and could forgive the tangents he went off on, up until the end. I did, generally, still like the end, even so. I still recommend this and think you'll like it -- I just wish Perry'd landed it better. It was almost a 4-star book, possibly more, but that ending . . .

If you have -- or eventually do -- read this, let me know what you thought of it. I'm really curious to see what others thought.