Evan Smoak's middle name might as well be Adrenaline 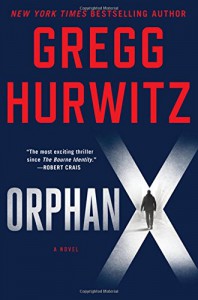 I firmly believe, and have said so repeatedly here, that it's not the novelty of an idea that makes a book worth reading, it's the execution. But for some reason, because I've seen/read this story (at least what one can tell from the blurb) so many times, I put off reading it. That was stupid. There's a reason some stories, some ideas are told so many times: when done well, they are great.

That's what we've got here. Evan Smoak is an Orphan (he's also an orphan, but that's not all that important). From a pretty young age, he's been trained as an off-the-books special operative for the US government, with a tie to only his handler. No other connection whatsoever to any covert agency, budget, oversight. Nothing can possibly go wrong with that, right? At some point he runs into another Orphan and is struck by the differences between the two -- clearly, Evan's training involved the cultivation of a conscience and a modicum of ethics. This splash of humanity gets this human weapon into trouble and he leaves the program.

But it's not like he's got a backup plan for his life, he's trained for only one thing, so he becomes The Nowhere Man. If you have a problem, if no one else can help, and if you can find him...maybe you can hire, well, the A-Team. Because The Nowhere Man can't be hired. If he helps you, all he asks is that you find someone else in trouble and give them his phone number. Evan goes on for some time like this, helping people who can't help themselves, getting some justice for those who are let down by the system, etc.

Until one day, things go pear-shaped when meeting a new client, and suddenly Evan finds himself (for the first time in his life) the hunted.

About the same time that his professional career is blowing up (almost literally), he finds himself having a personal life. Until now, Evan's lived a pretty monkish life -- free from personal ties, anyway. A lonely existence to be sure. and he starts to have friends? Not surprisingly, at all, this adds some complications to his already pretty complicated week.

This is an exciting read, fast-paced, energetic, incredibly violent -- the fight scenes are great. This is essentially a Jason Statham movie in text form (although Statham always looks like someone who could star in an action flick and Evan doesn't). It's fun, it's impossible to take seriously, (but I can't imagine that Hurwitz expects anyone to). Evan's The Punisher without the anger, The Equalizer without the age, Jason Bourne without the memory issues, James Bond without the government backing/British accent, John Wick without the dog or criminal record.

Okay, it's clear I don't know what to say about Orphan X at this point . . . this is a fun read, I'm glad I finally got around to it, and I'm looking forward to the sequels. If you like action flicks, give it a shot.