A Literary Thriller that's sure to impress 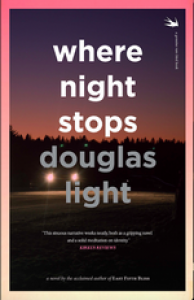 She smells of lemons and warm cinnamon and isn't very pretty. Sliding onto the barstool next to me, she says, "Can I sit here?"

The bartender, the woman, and me -- we're the only people in the bar. She can sit anywhere. It's not just a seat she wants.

I study her a moment then catch the bartender's eye, the order is placed without a word. Whatever the woman wants. Alcohol, like long marriages, has a language of its own, one not composed of speech.

Now, that's how you start a novel.

So, our narrator is orphaned the night after his high school graduation -- however odd it may feel to call someone on the cusp of adulthood an orphan, he is one (and the back of the book says so). Suddenly his college dreams, plans for the future are gone, as is his past (other than memories). He finds his way from Iowa to Seattle and takes up residence in a homeless shelter. The closest thing he has to a friend there sets him up with a way to make some money -- more than he'd been able to scrape together from an under-the-table gig at a gas station.

It's obviously not above-board, but it's good money. What else is a kid with no ties to society, no dreams, no means and nothing better to do? We bounce back and forth between the opening scene (and what follows) in the bar and his burgeoning criminal career. He bounces all of the globe playing small roles in what are likely significant crimes. The resulting story is a combination of tragedy, comedy of errors and Bildungsroman. All of which leads up to a concluding scene that is at once unexpected and the only appropriate thing that could've happened.

As a reader. you're never impressed with our narrator's choices. You may understand them, but it's hard to be behind them. Especially because after a certain point, our young man makes a giant mistake. The reader knows this -- and has to hope that whatever he does, he figures out his mistake or gets out of this life soon.

The plot's decent and will carry you along well enough. But it's not why you will stick with this book (at least not primarily), it's Light's writing. In the middle of all this, there are sentences like, "Walking the empty night street, my kidneys rattled with anxiety." I'm pretty sure this is biologically nonsensical (I haven't bothered to check with my son's nephrologist, but I was tempted to), but that doesn't stop it from being incredibly effective -- you know precisely what Light's going for there, and in the moment, your kidneys felts a little weird. There's something to his writing that made me stop every so often to re-read a sentence or paragraph or passage -- not because I missed something or didn't understand what was happening, but because Light captured a moment, an idea, or phrase in such an engaging way that I didn't want to move on.

I'm not sure if this is a very literary thriller, or a literary novel playing with thriller tropes. Nor am I sure that I care, but this is the kind of book that can appeal to both target audiences. It's a good example of either genre, and a better example of why the distinctions are specious. There's an interesting crime story here; a character study; a look at what happens to someone who has no connection to his future, society, or his past -- oh, and it's a good read, too.

Disclaimer: I received this ARC in exchange for my honest opinion about the novel, I appreciate the opportunity, but it didn't influence the above.