Surpasses it's predecessor and sets up a killer (and hilarious) conclusion 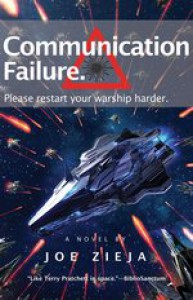 So, Captain Rogers has escaped with his life after saving the 331st Meridian Fleet from a takeover from almost all the droids on board, now he's been made acting admiral and is faced with a potentially bigger threat: the Thelicosan fleet -- the very fleet that Rogers' ships are to keep on their side of the border -- has informed him that they are about to invade. Given the size of the fleets facing off, this is an invasion that will not go well for the 331st.

So how is this would-be con-man, former engineer, and current CO going to survive this? He hasn't the foggiest idea.

Clearly, for those who read Mechanical Failure (and those who haven't have made a mistake that they need to rectify soon), whatever solution he comes up with is going to rely heavily on Deet and the Space Marines (the Viking/Captain Alsinbury and Sergeant Malin in particular) will be heavily involved. Malin has taken it upon herself to help Rogers learn some self-defense (even if that's primarily various ways to duck), the Viking is questioning every decision her new CO is making, and Deet is continuing his exploration into human behavior/consciousness (he's exploring philosophy and spirituality at the moment -- which is pretty distracting). Basically, if Rogers is looking for a lot of support from them, he's going to be disappointed.

It turns out that the Thelicosans didn't intend to send that message at all, what they were supposed to communicate was very different, actually. But before Rogers and his counterpart can find a way to de-escalate the situation, shots are fired, milk is spilled, and events start to spiral out of control. Which isn't to say that everyone is doomed and that war is inevitable, it's just going to take some work to keep it from happening. There are forces, groups, entities -- whatever you want to call them -- hawkish individuals who are working behind the scenes to keep these cultures at odds with each other, hopefully spilling over into something catastrophic. Which is something too many of us are familiar with, I fear -- and something that someone with Zieja's military background is likely more familiar with. The Thelicosans and Meridians discover who these people are -- and how they are attempting to manipulate the fleets -- and the big question is how successful they'll be.

We focus on three Thelicosans, but spend almost as much time on their flagship (The Limiter) as we do the Meridian flagship (Flagship). Grand Marshall Alandra Keffoule is the commander of the border fleet -- at one time, she was a star in the special forces, and now she's been assigned to the border fleet as a last chance. She fully intends on taking full advantage of this opportunity to make history and restore herself to her position of prominence in the military. Her deputy, Commodore Zergan, has fought alongside her since the special forces days and is now trying to help her rebuild her reputation. Secretary Vilia Quinn is the liaison between the Thelicosan government and the fleet. Quinn's development through the book is a lot of fun to watch -- and is probably a bigger surprise to her than it is to the reader, which just makes it better. Thelicosan culture is saturated in science and math, and is full of rituals that are incredibly binding and incredibly difficult for outsiders to understand. In many ways, the culture is hard to swallow -- how a society develops along those lines seems impossible. But if you just accept that this is the way their society functions, it ends up working and stays consistent (and entertaining).

Lieutenant Lieutenant Nolan "Flash" "Chillster" "Snake" "Blade" Fisk, the best pilot the 331st has is a great addition to the cast -- yeah, he's probably the most cartoonish, least grounded, character in Rogers' fleet -- but man, he's a lot of fun (and I think it's pretty clear that Zieja enjoys writing him). think Ace Rimmer (what a guy!), but dumber. Mechanical Failure's most cartoonish character, Tunger, is back -- the would-be spy/should-be zookeeper finds himself in the thick of things and is well-used (as a character) and is well-suited to his activities. Basically, I put up with him in the last book, and enjoyed him here. I'd like to talk more about Deet and the other characters here -- I've barely said anything about Rogers (he develops in some ways no one would've expected) -- but I can't without ruining anything, so let's just say that everyone you enjoyed in the previous installment you'll continue to enjoy for the same reasons.

Mechanical Failure didn't feature a lot of world-building outside life on the ship. Zieja takes care of that this time -- we get a look at the political situation between the various governments, and the history behind the four powers. Which isn't to say that we're drowning in details like George R. R. Martin would give us, it's still breezy and fast-paced. Still, there's a handle you can grab on to, some context for the kind of madness that Rogers finds himself in the middle of.

One of my personal criteria for judging books that are heavy on the humor in the midst of the SF or mystery or fantasy story is judging what the book would be like without the jokes. The Hitchhiker's Trilogy, for example, would fall apart in seconds (and few rival me for their devotion to that series). Magic 2.0 would hold up pretty well, on the other hand. The Epic Failure series would be another one that would hold up without the jokes. I'm not saying it'd be a masterpiece of SF, but the story would flow, there'd be enough intrigue and action to keep readers turning pages. However, you leave the humor, the jokes and the general whackiness in the books and they're elevated to must-reads.

There are too many puns (technically, more than 1 qualifies for that), there's a series of jokes about the space version of The Art of War that you'd think would get old very quickly, but doesn't -- at all; and Rogers has a couple of bridge officers that make the pilot Flash seem subtle. Somehow, Zieja makes all this excess work -- I thought the humor worked wonderfully here, and I think it'll hold up under repeated readings.

I thoroughly enjoyed this book and can't wait to see where Zieja takes us next.

Disclaimer: I received this book ARC from the author, and I can't thank him enough for it, but my opinion is my own and wasn't really influenced by that act (other than giving me something to have an opinion about).