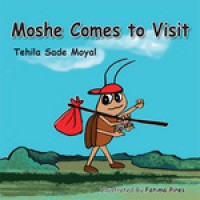 I feel like saying anything less than positive about this cute little book is the equivalent of kicking a puppy. Which doesn't mean that this is going to be glowing, it just means that I'm already feeling bad about what I'm going to say.

Martin hears something that scares him in the night -- a classic starting point for a kid's book -- and his parents try to help him find the monsters. They turn on the lights, look through his room, etc. This is all well and good so far, until we get the couplet: "In this manner, several nights go by, / With no apparent fear in either parent's eyes." Huh? The parent's aren't scared? Isn't that the point? Anyway, Dad gets the idea to write "an agreement with fears."

This agreement is the key to the book -- there's even a blank Agreement form in the back for the reader's own use. Sadly, I don't understand the agreement -- and I can't imagine that I'm the only parent who'd like to try something like this, but can't figure out exactly what's supposed to be the point.

We transition from this to Martin's mother beings scared by something in her bathroom. Great idea -- even moms and dads get scared. It turns out that Mom's scared by a cockroach -- a talking 'roach, I should stress -- who Martin befriends. I like, I really like this part of the story. And then to help Mom deal with her fear of Moshe, Martin comes up with an agreement for his mom like the one they came up with earlier for him. I even kind of understood this one.

As soon as it's accomplished, Moshe leaves and the book's over. What? I don't get it. This book is supposed to help kids deal with their fears -- and it might, work in the original language,but in English . . . . nope.

Pires' art was fine. Nothing fantastic, but that's it. I'd have appreciated a smaller cockroach, but if he can talk, maybe he's like one of Narnia's Talking Beasts and has to be larger. I'm not sure. Otherwise, that was fine.

It's cute, and comes close to working, but just doesn't. A little editing, a little clarifying, and maybe you have a cute book that helps kids with fears. Right now, it just doesn't.