A Great Intro to a Great Series 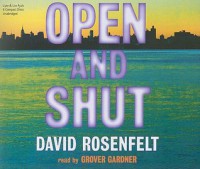 I honestly can't believe I've talked to little about Andy Carpenter and David Rosenfelt here -- it works out, when you look at timelines and whatnot, I've been reading him a long time before I started blogging. Still, it's hard to believe since it's one of my favorite series, and has been going for so long. Yeah, maybe the series is getting too long in the tooth, but for something to get to book 16+, it's got to have a pretty solid foundation, right? That foundation is <b>Open and Shut</b>, where Rosenfelt introduces the world to Andy Carpenter, dog lover extraordinaire and pretty decent defense attorney.

Carpenter is a hard-working lawyer, taking on many cases that don't pay much, but do some good. He's obsessed with New York sports and his golden retriever. He's going through a divorce -- and has started dating his investigator. He's got a great sense of humor, is known for a hijink or two in court, and seems like the kind of guy you want in your corner. His father is a big-time D. A., the kind of Prosecutor that people hope/assume theirs is -- honest, hard-working, tough on crime. So it shocks Andy when his dad asks him to take on a client for a retrial on a murder case -- a murderer his dad put away and his currently on Death Row.

Andy goes ahead with the case, not sure that he should. But it doesn't take long before he starts to believe in his client's innocence. About that time, things get interesting and maybe even a little dangerous.

Almost all the elements that go into a typical Andy Carpenter novel are here -- even if they're just being introduced at this point. The jokes are fresh, the clichés have yet to be developed. It's a good mystery with some good non-mystery story elements. And, best of all, some really fun courtroom moments -- not just antics on Andy's part, but some good depictions of legal/trial strategy and the like. I've been thinking lately that the latter Carpenter books have been giving the courtroom short shrift, and seeing what Rosenfelt does here just solidifies that thinking.

Gardner's narration didn't blow me away or anything, but it was good work. I can easily believe him as Andy's voice and can see him really growing on me (not unlike George Guidall and Walt Longmire). He'll keep you engaged in the story, and deliver a line or two in a way that will bring a smile to your face.

Give this one a whirl, folks -- text or audio -- you'll enjoy yourself.