Everyone's favorite Amazon gets a YA treatment 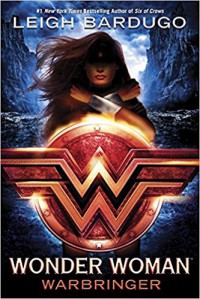 So this YA Wonder Woman novel starts off on Themyscira, where 17-ish year-old Diana is struggling to find her identity in the shadow of her mother. In this novel, Themyscira is populated by more than just ancient Amazons, they've been augmented by women throughout history who, while dying in battle, call upon a female god. They are then transplanted to Themyscira as a sort of feminist Valhalla.

Diana rescues a young woman from a boat explosion she witnesses, bringing her to the island (but not letting anyone know about her). This starts to destroy the island and the women who live there -- and Diana receives quite the prophetic word about this girl. She's a descendant of Helen of Troy, and like her ancestor, her mere existence promises to bring war throughout the Earth. Unless Diana can bring her to a certain place in the next few days. So Diana grabs a certain lasso, a couple of bracelets and takes off.

Basically, what ensues is a Rick Riordan-esque journey to get Alia to the goal. Sure, they start with a heck of a detour to New York City -- which is pretty fun detour for the reader. While in NYC, they pick up a little entourage to accompany them. There are people who are trying to kill the Warbringer (not realizing there's a way to cure her) before World War III erupts and a few minor figures from Greek mythology show up to make things more difficult.

There's some really good interaction between Diana, Alia and Alia's BFF (name escapes me). The action scenes are pretty good. The big twisty reveal wasn't. There seemed to be some inconsistency about how familiar Diana was with things in the modern world, but on the whole, the book worked well enough I could ignore that. What worked in this book, worked really well. The things that didn't work, also didn't ruin anything.

As far as the audiobook part goes -- Marno does a fine job. Initially, I thought she sounded too much like Hillary Huber, but the more I listened the more I decided I was silly for thinking that. I do think that she could put a little more excitement in her voice during the combat or chase scenes (see the aforementioned Huber for an example), it really didn't seem matter what was going on in the scene, her reading was the same. But aside from that, I had no complaints.

I'm not saying that i loved it, but I'd absolutely read/listen to the sequel that's hinted at in the last chapter. Good story, interesting characters, and a pretty good narrator. All the elements for an entertaining 12 hours are there -- a good way to spend some time, and a promising beginning to this new series. Although, the next is Batman, and so you have to guess that the third will be everyone's favorite Kryptonian Boy Scout -- hopefully they move beyond DC's Trinity soon, I'd quite enjoy something like this about The Flash, Green Lantern, etc.