The Lady Cop continues to stir up trouble while setting things right. 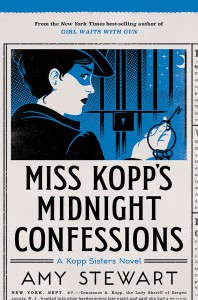 Without meaning to slight Girl Waits with Gun or Lady Cop makes Trouble, this is the best constructed novel in this series. There's a unity of theme, stories that complement each other, and a level of (honest) introspection from the characters that we haven't seen before. That said, I don't think I enjoyed it nearly as much as I did the others. So it's a little bit of a trade-off.

We are treated to three stories of young women, one sixteen year-old and two eighteen year-olds, who leave home for various reasons. They all want something more than they can have at home -- meaning, a job, excitement, freedom, and maybe something more. One girl did everything right, but sill was arrested for waywardness. One was pretty foolish, and did some illegal things, but was really arrested for the foolish mistake. The third was Constance's little sister, Fleurette. Constance went to bat for all three -- interceding with the law (when applicable), with family (when she could), trying to give them the ability to live the life they wanted to -- and each of them pressed Constance's ability, job and standing as she did so.

While this is going on, Constance is making headlines across the nation -- making her both a distraction to her friend the Sheriff, as well as a voice for social change. I know she regrets the former, and I'm not convinced she relishes the latter. If she had her druthers, I think Constance would prefer just to do her job and be left alone. But she is learning how to use her notoriety -- or at least her relationship with members of The Press -- to help her accomplish her goals.

Constance begins to come to terms with some very unfortunate realities of her life, and begins to grasp what the future may hold for her, both professionally and personally. In some way (I think), she thought she could keep the life she had and just add on her job on top of it. But between her fame, the time she spends away from the home, Fleurette's aging and getting ready to leave the nest, and everything else going on around the sisters, that's no longer possible. Her old life is gone, and the new one is too in flux for her to get a handle on it. Assuming that there are more Kopp Sister novels to come, watching Constance figure out what her life will be -- and hopefully she gets a hand in shaping it -- will be the key to the series as it progresses.

On the whole, this one didn't work as well for me as the previous books did. But several of the individual elements I found compelling and wanted more of -- I wish we got more of the story about Edna Heustis (I don't need to know what happened over the rest of her life, I just want a clearer picture of the next few months) or her roommate. I'd have liked more interaction between Constance and her boss -- we just didn't get enough of them -- and an honest conversation about the future would've been nice. I did think the ending of the Fleurette story was handled perfectly -- I don't think I'd change a thing about that whole storyline, really. Still, this novel was somehow less than the sum of its parts, for me -- but I can easily see where I'll be in the minority for thinking that. I'm not saying I didn't enjoy it, I just should've enjoyed it more.

Strong characters, some strong themes (ones you usually don't see in Detective fiction), and a tumultuous time period (for several reasons) combine to deliver another satisfying entry in this series that'll please existing fans and probably pick up a few more.

Disclaimer: I received this eARC from Houghton Mifflin Harcourt via NetGalley in exchange for this post -- thanks to both for this.