Convinces me to stay away from the London Underground 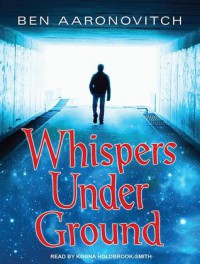 Okay . . . man, how to sum this one up. Peter, Lesley and Abigail Kamara (a teen-aged neighbor of Peter's parents) go down into the tunnels of the Underground to look for ghosts, and find one. What we learn here will be important come <b>The Furthest Station</b>. This is a fun little foray into the wider supernatural world of this series.

And then we get back to police work -- a man is stabbed at the Baker Street tube and there's enough for Stephanopoulis to bring in Peter just to rule out magic. Which he can't do. It turns out that the victim is an American, which makes everything unnecessarily complicated. And then it turns out that he's the son of a US Senator, and things get worse. The FBI sends an agent -- Kimberly Reynolds -- over to help out/observe/get in the way. So Peter has to handle to non-normal side of the investigation, keep Seawoll from having to hear about magic (because it interferes with actual police work in his mind), and not let Reynolds know that there's anything not run-of-the-mill about Peter and the investigation. All at the same time.

Very quickly, it seems clear that there's something going on that Peter and the rest just don't get. Yeah, magic was involved in the killing, but there's no real trace of it in the victim's life -- not with him, his school, his friends, his enemies, or anything. So where's that come into play? The answer comes when it's least expected and in a direction that was impossible to predict.

Aaronovich really pulled a rabbit out of his hat this time. Sure, he made both the rabbit and the hat, so it's to be expected that he'd do that. But, there's just something about the way he did this one -- police procedural that accidentally turns up the answers and leads to something bigger than anyone expected. A great balance of UF and Procedural (the last one was a bit too light on the procedural for me).

Guleed doesn't get enough to do, but I liked her presence. Lesley really gets to shine a bit here, and her inability to be a regular part of the police force is underlined here for her and Peter -- and just how horrible that is emphasized throughout. When Stephanopoulis is the rational, supportive authority figure for Peter (other than Nightingale), you know that Seawoll is a little over the top in his antagonism to all things Folly. But mostly, this was about characters we know and like getting to do things to keep us liking them, and probably liking them more while introducing some new figures for us to enjoy.

Really, the main take away I had from this audio production was a bit of joy over the fact that Holdbrook-Smith isn't perfect. His Agent Reynolds was just bad. At least the American accent part of it. I enjoyed his flubbing of that more than I should have. Meanwhile, everything else he did was just fantastic -- especially Lesley. The range of emotion, sarcasm, etc. that he can put into her voice while still accounting for her lack of face is just incredible. Also, Zach Palmer -- the roommate of the murder victim -- was just hilarious. I know a lot of that was in the text, but the way Holdbrook-Smith brought him to life was wonderful.

As impressed as I was with the way that Aaronvich did everything he did, something about this one didn't work for me as much as others in the series do (either in this re-read or originally). I'm not sure why. Still, this was a good, entertaining book that anyone who likes the concept of a Police Officer/Wizard in training should enjoy.