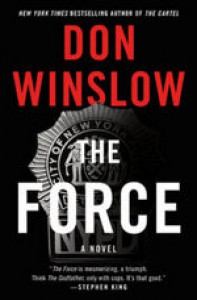 Our ends know our beginnings but the reverse isn't true.

If Denny Malone's beginning knew his ending, would it have prevented anything? Or would Malone have convinced himself he could find a work-around? Probably the latter.

Denny Malone is a one of NYPD's Finest -- a detective sergeant, and the head of a task force (known as "Da Force") on the front line of the War on Drugs. He and his team -- who've been together for years -- rule Manhattan. Sadly -- and perhaps naturally -- they're corrupt. They take (and are given) money, drugs, weapons and more from criminals (of all levels), lawyers and others. They pass on some of these to lawyers, city officials and other cops -- and keep a whole lot for themselves. Through their methods, they do keep some sort of peace on their streets -- sure, they pass on some of the violence and poison on to other parts of the city, but that's not their concern.

After doing this for years, the wheels start to come off -- it's tough to say what the first domino (to mix metaphors) was to fall, but once it does, there's nothing stopping the rest -- as much as Malone may try. The result is one of the most powerful crime novels I've read in years.

The characters are rich, fully developed and they seem like they could step out of the book onto the streets of NYC with no trouble. You are sickened by them, want to see them stopped -- yet start to understand them, like them as people, and -- despite yourself -- hope at least some of them get away with it all. At one point, I was laughing at their banter like we were all old friends hanging out, and it bothered me how much I enjoyed them as people (that faded somewhat in a few pages).

This book feels like the love child of Tom Wolfe's The Bonfire of the Vanities and Nicholas Pileggi's Wiseguy. You really feel like you understand how the city of New York is run -- at least parts of it: the police, elements of the criminal world, and parts of the criminal justice system. Not how they're supposed to run, but the way it really is. He achieves this through a series of set pieces and didactic periscopes. Three quick examples: you get Malone musing on how the way that cops have to learn how not to care about citizens and criminals, because otherwise, they'll end up hating them. A great section showing how The Force goes out on the town to celebrate. The following quotation about the attitude of a prosecutor and Malone about his creative use/understanding of the truth while testifying:

Because the real truth that they both know is that without cops “testilying,” the DA’s office would hardly get any convictions at all.

If the world played fair, he’d play fair. But the cards are stacked against the prosecutors and police. Miranda, Mapp, all the other Supreme Court decisions, give the advantage to the skels. It’s like the NFL these days--the league wants touchdown passes, so a defensive back can’t even touch a receiver. We’re the poor defensive backs, Malone thinks, trying to keep the bad guys from scoring.

Truth, justice and the American way.

The American way is, truth and justice maybe say hello in the hallway, send each other a Christmas card, but that’s about the extent of their relationship.

You throw that kind of stuff in with a compelling plot, believable characters, striking details and Winslow's voice? You've got yourself a dynamite book.

If someone had told me this was non-fiction, I'd believe it (maybe I'd balk at some of the details of his personal life being told in a Non-fiction book, but otherwise...). It rings true -- and I spent most of the book just hoping that Winslow was exaggerating and fearing that he was holding back. The whole thing feels real, it seems ripped from the headlines, and is beyond engaging -- it's engrossing, it'll take over your mind, make you see deception and corruption everywhere.

Winslow nailed it. It's just mindbogglingly good. I'm going to over-hype it if I keep going -- so I'll leave it at that. Get this book and then strap in for one of the best reads you'll have this year.