An unpredictable and daring conclusion to the trilogy 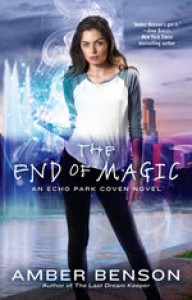 I don't know how to talk about this book without discussing the series as a whole or getting into plot details that no one wants me to, really. But I'll try.

<b>The Last Dream Keeper</b> left things in a very dark place -- even for the middle installment in a trilogy. So it was with a little trepidation that I started this -- just how much darker were things going to get? Thankfully, not much. Which is not to say that the book took on a euphoric or optimistic feel, but there were glimmers of hope within the darkness. Some small moments of victory in the face of loss before the main action of this particular novel took off.

The Flood is gaining momentum -- the anti-magic movement is getting governments around the world to turn on witches, to start interring them (at best). While running for their lives and liberty, someone they have to unite to take a final stand. Lyse MacAllister, herself still new to magic, takes up the challenge to lead her sisters against the Flood.

When talking about book 2, I said: "And when I say that the plot takes this book in dramatically different directions than you expect, it is almost impossible to believe that the closing pages of this book and the closing pages of <b>The Witches of Echo Park</b> belong to the same series -- much less are separated by only one novel. Somehow, however, Benson pulls it off -- I really have no idea how. When I think about it, it doesn't make any sense -- but in the moment, it absolutely worked." That's even truer for the difference between Book 1 and 3. It's impossible to guess your way through this plot -- but it's all real, it all flows organically.

I (and many others, I realize, I don't claim to be original) have often said it's all about execution. There are plots that when described, I'd say I wouldn't like that I have -- and vice versa. If you gave me either the series outline or the book outline -- I'd have said, "Nope, not for me." But Benson pulls it off in a way that I: 1. enjoyed reading and 2. appreciate. I don't know how to talk about the plot anymore than that.

These characters all seemed real -- all of them (even the pair that really didn't exist in our world) felt like people you could go meet in real life. Well, maybe not the people in The Flood, let's be honest. But everyone else absolutely did. Which is a real strength in a book that got as outlandish as this one.

I've read all of Benson's books (at least her solo books) now -- and it's great to see her develop into the writer of this book. Nothing against <b>Death's Daughter</b> or the rest of that series, but the depth of character and craft in this series is beyond that. Yeah, I maybe didn't like everything she did with these characters or the books, but I liked the way she went about it.

I'm throwing in the towel here, I just don't know how to talk about this book -- strong characters (in every sense of the phrase), honest emotions, a bananas plot, and an ending you won't see coming until it's too late jump out of the way. Heroism, (not just romantic) love, magic, family -- this series has it all. Give it a try.