Reacher's in a hot town, summer in the city 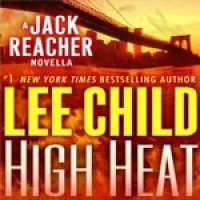 Ahhh, finally -- an actually satisfying shorter Jack Reacher story. It's longer than the others I've tried -- a novella, not just a short story. That's probably a lot of it, but there's something more to it -- just don't ask me what.

Reacher's on summer vacation before his senior year -- pretty much fully grown, has a good head on his shoulders, and is as arrogant and invincible feeling as most teenagers (he's just big and tough enough to back it up). He's visiting NYC for the day before going to visit his brother at West Point.

It's 1977, a summer in NYC known for two things: incredible heat and Son of Sam. Both have an impact on this story (no, Reacher doesn't stop the killer or anything -- phew). Reacher flirts with some college girls, breaks up a fight with a mobster and an undercover FBI agent, survives a blackout, spends some quality time with one of the college girls and helps the FBI agent out -- while engaging in a few solid fights.

The action takes place in one night -- probably 14 hours or so, but Child manages to cram a lot into those hours. Is it realistic? No, not even by Reacher standards. Is it compelling -- yup. Will it keep you interested? Oh, yeah.

Dick Hill sounded to me like he as having a lot of fun reading this one -- which is fitting, it's probably the most "fun" Reacher story I've come across (well, maybe the Reacher/Nick Heller story in FaceOff is a little more so). He does his typical job, satisfying in his delivery, keeps you engaged, doesn't wow with technique.

It's a fun story, nothing to get excited about, but something that Reacher fans will enjoy, in a complete-feeling story. Good enough for me.