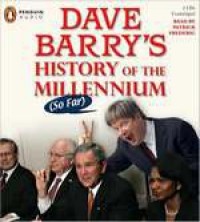 Back in high school, I worked at a public library (shock, right?), and I kept shelving this book -- Dave Barry Slept Here, and eventually succumbed and took it home -- several times. I fell in love with Barry's humor, and read him a lot over the next decade -- every book, as many columns as I could find, etc., etc. But I eventually stopped, for no good reason that I can think of (it's probably not Harry Anderson's fault) -- and have really only read his novels since then.

Still, when I saw this audiobook on the library's site, it was an automatic click -- without even reading the description. This is essentially a reprinting of his "Year in Review" columns for the first few years of this millennium and a review of the previous 1,000 years of human history.

It was hilarious. Just that simple. There's nothing more to say, really.

In the beginning Frederic played it straight -- which surprised me a bit, but I liked the effect. A serious reading of Barry's goofiness worked remarkably well. Later on, Frederic seemed to loosen up -- he even did a couple of decent impressions. I really enjoyed his work on this.

Yeah, the humor's a bit dated, but funny is funny. This is a great look back at the early part of the 21st Century (and before). I laughed a lot, remembered a few things, and generally had a good time with this.