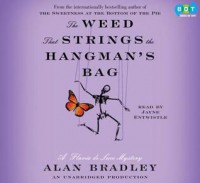 I think I'd have phrased things a bit differently, but in the interest of time, I'm just going to copy and paste from my thoughts when I read the book a couple of years ago and add in a bit for the audiobook:

The plucky young chemist with a nascent obsession with death is back in action. The case is a little less personal for Flavia de Luce this time, but that doesn't stop her from jumping in whole hog to get to the bottom of it.

Flavia runs into a couple of traveling performers with some car trouble and before you know it, she's got them some help--and a gig. While she hangs around the TV star and his assistant, she finds herself surrounded by some of her town's darker history and then face to face with a murder. And Flavia being Flavia, she can't resist sticking her nose in and making sure all the knots are untangled--particularly the ones adults are ignoring, despite them being painfully obvious to her.

We get less of Flavia's sisters (and the rest of the household, come to think of it) in this installment--but when they're around, their impact is greater. Clearly, as this series continues, there's going to be some serious drama on the homefront with some major implications for the de Luce family, I hope Bradley tackles that quickly, the foreshadowing's getting old quickly.

Unlike with so many other amateur sleuths (particularly juveniles), it's nice to see that her reputation and track record are acknowledged by some in the community -- which is both a help and a hindrance, I hope to see more of that in the future.

Entwistle really impressed me again with her narration. Not just the way she nails Flavia -- both the good and the bad aspects of her personality. But her work on the rest of the characters -- the TV star's assistant in particular -- really won me over, showing a little more range than we got to see, er, hear last time.

My only major quibble with this installment is that it takes far too long to set the main action of the novel up--in a 348 page mystery novel, you'd better get to the central crime before page 150 or so. Unless you've got a heroine like Flavia to focus on, I can't imagine being patient enough to wait that long to get the ball rolling. Entwistle's performance helps, but, man, it drags on awhile before Bradley's done setting things up and gets things moving.

Another fun (occasionally hilarious) read, with a mystery satisfyingly twisty, with just enough red herrings to get you through it.