A Charming Waste of Time 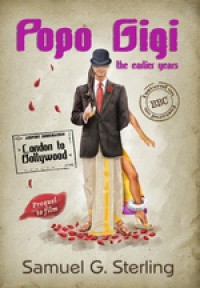 In circumstances difficult to explain, hard to believe, and probably meant to be comical -- Popo Gigi and his twin brother, Ramyou, are born while their unwed mother emigrates from India to England. They spend years in poverty, gaining some sort of financial stability when their mother eventually marries. Ramyou is a troubled child with wild appetites (in just about every sense of the word -- at least eventually), while Popo distinguishes himself academically. He eventually is admitted to, excels in and graduates from Oxbridge. Following graduation, he sets his mind to seeking some sort of understanding/closure regarding his father and his utter disregard for his twin sons. So Popo travels to India and begins a series of haphazard adventures as he attempts to meet and then bond with his father -- hilarity ensues (theoretically), as does romance, a dash of danger, and more.

There is a charm to the writing that I can't deny -- even when the book seemed pointless -- and even when the writing was muddled enough that I wasn't sure what was going on (which happened a lot). Nevertheless, the it felt like sitting down and listening to a charming young man tell a long, rambling story. And, boy, do I mean rambling. Still, you can't help but like the prose.

It's the content of the prose that is problematic. It's hard to believe a lot of the plot -- and it's not that easy to see the links between events that should follow each other, plot lines that are just abandoned (for chapters on end, when not totally). The "humor" is largely dependent on the kind of things I really haven't found funny since I was in grade school -- untimely erections, urine, excrement. I don't care how many times they're repeated, bathroom jokes just aren't funny.

I wanted to like this, but I couldn't. This was going to be a 2-star read for me, that I kinda felt guilty about, because of the spirit of the novel -- I couldn't help feeling affection for the style and writing, even if I didn't like it. But the last few chapters killed that for me, it's like they belonged to a different novel. There's just no point to reading this book.

Disclaimer: I received this novel from Jolliwood Books in exchange for this post -- I appreciate it, even if the book didn't click for me.