One war ends, another begins, and bigger things loom. 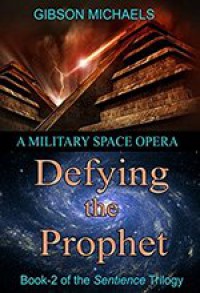 The second installment of a trilogy has the hardest role -- the first introduces us to the world, the characters, the conflict -- basically sets the stage for everything in the series. The third has to tie up everything and give a satisfying conclusion. The second has to build on the first and make the audience want to read the end. There needs to be a clear arc to the book (or what's the point), yet the conclusion has to make us thirst for more. It's also bound to be the most overlooked entry in the trilogy (The Empire Strikes Back being one of the exceptions that proves the rule). As such, Defying the Prophet fulfilled most of the duties of the second installment, and was entertaining enough -- but man, I just wanted more from it.

I also usually find it difficult to talk about the second installments more than the other two, so here are some general observations as I put off any real analysis off until I finish the series.

I was surprised -- and pleased -- at how quickly Michaels wrapped up the Civil War story in this book -- I really expected it to go on much longer. I'm not entirely certain I liked the mechanism by which he did it -- but I can't say I disliked it, but it almost seemed a bit too easy. Oh well, he uses the state of military readiness of the various human governments to be able to respond to the looming alien invasion in an effective manner.

The battles between the human factions were good. The battles between Raknii and humans was great. Seriously great -- particularly the first one. I'm not sure Michaels could've sustained things there longer without sacrificing quality, but I wish he did. Thankfully, there's more to come on this front, and I can't wait to see how things go there.

I didn't find the plots involving the internal developments and movements with Raknii as compelling this time around -- and they were my favorite parts of the first book. We also didn't get as much of them this time. Still, I appreciate what he's doing with the Raknii overall and would willingly read more about them beyond this series.

Meanwhile, at least a few people in the USA have started to figure out just how the AI that runs things for them undermined them in the lead-up to the Civil War -- and during it. They still don't seem to have a great idea what they're going to do with that knowledge however . . .

My biggest problem with this book is that at a certain point it was like Michaels realized -- "you know what I haven't included in this series? Romance. I'd better fix that." -- and then, bang-zoom, we've got two love stories going. One page it's all political/economic/military intrigue and action and the next it's political/economic/military intrigue and action plus hearts, flowers, and anatomy. Which was awkward enough, but then those love stories just weren't that well-executed. He reminded me of Aaron Sorkin's attempts at romantic comedy in Sports Night, The West Wing, and The Newsroom -- I loved almost every other thing Sorkin did in those shows, but man . . . romance just isn't his thing (I'm not even going to mention Studio 60, because that was just bad all around) . Michaels tried -- and I appreciate the effort, and could enjoy what he was going for, they were sweet, but I just don't think he nailed the telling (and, yes, Mr. Michaels, if you read this, feel free to summarize this as "He favorably compared me to an Oscar Winning writer").

So we've got an interstellar conflict to wrap-up; at least one species' culture is going to be changed by this conflict; some internal shake-ups to go along with that among the Raknii; at least one human government responding to the sentient AI; the sentient AI up to something new; and a couple of other dangling plotlines -- and 340 pages to do it all in. Wrath of an Angry God is going to be a busy, busy conclusion -- should be a fun ride. This? This was good, but it's clearly the middle volume and really the poof's going to be in whether Michaels can stick the landing. My guess is that he can, but we'll have to see.

Disclaimer: I received this novel from the author in exchange for this post -- thanks Mr. Michaels.