A dynamite book marred by a preposterous ending 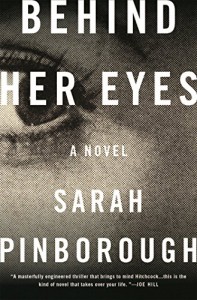 David and Adele have just moved to London to try to get a fresh start -- she's a stay-at-home wife, gorgeous, and seemingly frail -- most of all, she's deeply devoted to her husband. David's a psychiatrist who might be a bit too fond of his drink, and doesn't seem to be as devoted to Adele as she is to him. From the get-go we know there's a few things really wrong with their marriage, and you can tell that finding out just what they are (and if the drinking is really as bad as it seems) is going to be interesting, to say the least.

Louise is a single mom who needs something fun in her life -- things are going well for her ex and his girlfriend, and her son is going away for a month with them. Louise doesn't have a lot going on in here life other than her son -- she has pretty much one friend, a part-time job, and a social life that mainly consists of Netflix, cigarettes and wine. She's our point-of-entry character, the reason we care about anyone else in the book -- she's relatable, she's fun, she's real. On a rare night out, Louise meets and kisses a man (David) who later confesses to be married and leaves.

Naturally, the next day Louise meets her new boss -- David. They pledge to forget that night and move on professionally. Soon afterwards, Adele runs into Louise and a friendship develops between them -- Louise carefully never admitting that she knows Adele's husband.

Yeah, up to this point, this could be the fodder for a comedy -- something that Jennifer Weiner might write, but with a little more edge, and involving people in London. So maybe it's a dark Helen Fielding feel. Anyhow, Louise's relationships with each get deeper. And as that happens, the tone gets darker and darker -- everyone involved has secrets, and at least two of the people in this triangle aren't who we think they are. And before you know it, you've left Women's Commercial Fiction and turned the genre corner into Crime Fiction. There is evil or madness -- maybe both -- at the core of this story, and it's dark. But the book never goes as far as it could into the darkness -- it's careful about showing it. Just lets it out every now and then, so you know it's lurking out there.

The story is told from Adele's and Louise's perspective -- with flashbacks to earlier in Adele's life. Adele clearly has some problems, but it's unclear what they really are. It's tough to know whose perspective on things is more realistic -- particularly their competing ideas about David. Eventually, we start to see that one of these women is manipulating the other two in the triangle and their plans are pretty serious.

Pinborough does a masterful job of drawing you into the story, the characters, their destinies -- you can't help but care, and even before things become a psychological thriller, you'll find yourself very invested into what's going on with these people and what will happen. Once things become perilous . . . forget it, you won't be able to tear yourself away from this book. I loved the tone, the character development -- Louise is one of my favorite characters of 2017.

Now, for the first 290 pages I was enthralled and was about ready to call this the best thriller I've read in months -- maybe years. You can understand the hype about this book -- why Two Crime Writers and a Microphone devoted an episode to this book, etc. But the last 16 pages . . . I just don't know. It's impossible to really discuss these pages without defying my "no spoiler" policy. Let me put it this way, if you can swallow X -- you'll dig the last 16 pages, and your jaw just might drop in the final 6. Me? I choked on X, and was fed up with the last 6. Since I finished it, I can understand what Pinborough was trying to do -- and can even make a decent argument defending it. But I don't like it -- and think that even the best argument in her defense is codswallop.

Behind Her Eyes is a really strong book that will grab you, keep you entertained and will give you a conclusion that you'll talk about for days (at least).

What I want to give it after the last 16 pages: