A nightmare come to life for parents. A terrific thrilling read for everyone. 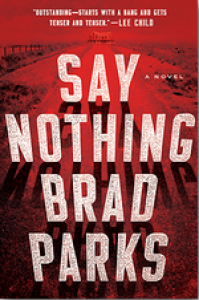 Since his debut novel, Faces of the Gone in 2009, I've considered myself a Brad Parks fan -- but when I heard that he was going to step away from his series for a stand-alone, I got a little nervous. Maybe I wasn't a Brad Parks fan -- maybe I was just a Carter Ross fan. Honestly, the parts of the Carter Ross novels that he doesn't narrate aren't my favorite. Also, we all know all too well that for every Suspect or Mystic River, series writers can give us a The Two Minute Rule or Shutter Island -- maybe grabbing this book was going to be a mistake.

While working on this post, I saw this from Sue Grafton talking about Say Nothing: "Terrific book. Truly terrific. Tension throughout and tears at the end. What could be better than that?" I'm a little annoyed by this, honestly. That's pretty much how I was going to sum up things for this post. Frankly, I wish Grafton would focus her efforts on finding another 5 letters between X and Z rather than preemptively stealing my lines.

We meet Judge Scott Sampson a few minutes after the biggest crisis of his life has started -- and a few minutes before he leans about it. Once you get to learn Sampson a little, you'll see that the bar for biggest crisis for him is set a little higher than for most. He's informed that his twin children have been kidnapped and is provided some pretty compelling reasons to believe that he's under surveillance (and will soon be given even more reason to believe that). Basically, the message he gets is this: if you want to see you children alive and well, you will do what we tell you to with a case. There are a few tests he has to pass to demonstrate his compliance -- tests that may do lasting damage to his career. But Sampson is eager to prove that he will do whatever he's asked for his children, consequences notwithstanding.

This isn't going to be an overnight escapade -- in fact, for Sampson and his wife (how have I failed to mention Allison?), this is an ordeal of indefinite duration. The stress, the worry, the intense reaction to this situation begins taking its toll almost immediately. These pressures test their individual ethics, bring secrets to light, expose and exacerbate problems in their marriage, and generally bring them both to the breaking point. They are also both driven to discover their inner-Liam Neeson in order to get their daughter (and son) back -- neither, really possess a particular set of skills fitting this goal, sadly. These attempts just make their personal and interpersonal woes worse -- and their lives continue spinning out of their control.

There is a relentlessness to the pace that's a pleasure -- and a drain. Jack Reacher gets a good night's sleep and enjoys coffee (and the less than occasional romantic interlude), Harry Bosch has jazz to relax him, Elvis Cole has that cat and Tai Chi -- as intense as things may get, by and large these guys get a break. But for Scott and Allison -- their children don't stop being kidnapped, and whatever solace they might find in alcohol, sleep or family -- it's a temporary band-aid at best.

This doesn't mean that it's not an enjoyable read -- Scott is a charming character and you will like him as you learn more about his life and family. You will not approve of every move he makes here (I guess you might, but I hope you don't), but on the whole you will understand why he makes them and won't judge him too harshly. Whoops, I was talking about tone here -- I had fun with this, even as I was feeling a shadow of the pressure Scott and Allison are under, I even laughed once. There's a real sense of peril when the narration focuses on the children -- but it never feels exploitative.

Like most readers will, I had a couple of pretty compelling theories about who was behind everything (and why), and focused on the correct one pretty early on. Which didn't stop me from being taken aback when it Parks revealed it -- he really handled that well. Another weakness comes in the last couple of pages where Parks ties up a few loose ends, and a couple of them feel too tidy. But it's instantly forgivable, and you want these characters to have something tidy after all they've gone through. On the whole, however, the characters and situations are complex and real (if heightened) -- Parks nailed this whole thing. I think this will hold up to at least one repeat reading -- the second read might even be more rewarding since you can appreciate what Parks is doing without being distracted by wondering what'll happen.

The tears that Grafton mentioned? Yeah, she got that part right, too.

This is a thriller filled with real people and situations that you can believe. You'll run the emotional gamut a time or two while reading this and will wish you could read faster just so you can make sure these kids make it home. I think I like the Carter Ross books more than this, but it's in Say Nothing that Parks finds his stride as a crime fiction writer. Really well done.

By the way, It turns out that I am a fan of Brad Parks. Phew.

Disclaimer: I received this eARC from Dutton via NetGalley in exchange for this post -- thanks to both for this, although my Primary Care Physician probably isn't crazy about what it did to my blood pressure.