A solid collection of UF stories 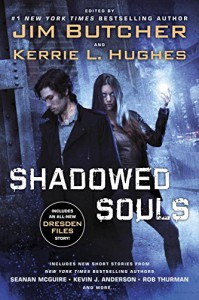 This is a collection of stories

based on the idea that good and evil are just two aspects of a complicated and very human story . . . [with plots that] play with the concept and invite the reader to explore the edges of their own darkness.

Eleven of the best Urban Fantasy authors working today contributed to this book, each bringing their worlds to life from that basis.

I'm not going to talk about each story, just about those from authors I talk a lot about here -- I don't have the time and energy to talk about Kevin J. Anderson, Kat Richardson, Tanya Huff or the others. If for no other reason, I feel like I should read more of these series/characters/authors before talking about them -- many of whom are on my "Try Out Sometime" list.

We, like the book, have to start with "Cold Case" by Jim Butcher. Harry's former apprentice, Molly, gets to shine in this story. This is one of her first tasks in her new role as Winter Lady -- in Alaska, fittingly enough. There's a large amount of on-the-job training going on for her -- more than she bargains for, really. We also get to spend some time with Warden Carlos Martinez -- been too long since we saw him. Perfect mix of action, humor and atmosphere -- we also get a good idea what's in store for poor ol' Molly.

We got to meet another member of the Price family in Seanan McGuire's "Sleepover". Elsie Harrington is a half-succubus cousin to Verity, Alex and Antimony. Their presence is felt in the story, but other than a couple of name-drops, they don't factor into things, it's just in that series' universe. Elsie's watching Antimony in a roller derby match and finds herself kidnapped. Not for any nefarious reasons -- just because some people needed her help and are bad at asking for favors. Elsie has a very Price-like voice and outlook on life, but she's got her own way of doing things. I really enjoyed this -- even if the ending felt abrupt.

Anton Strout got to revisit the series that gave him his start in "Solus," which featured Simon Canderous as a rookie DEA Agent dealing with a haunted house. His partner/mentor, Connor Christos, has almost no use for him at this point and seems to have no interest at all in working with him/training him. Maybe I'm not remembering the character as clearly as I thought, but I thought I liked him as a person more. Still, this was early enough in the relationship that it was probably the right way to deal with it. Other than happening before I was ready for it, I really enjoyed the conclusion of this story. In short, "Solus" was good, it reminded me why I liked the series and why I miss it.

My one complaint about all these stories (save for "Cold Case"), was that they were too short. It's not just Strout and McGuire. In all the stories, just as things started to get going, they resolved. I'm not saying I wanted a collection of novellas, but another 5-10 pages each, maybe?

Yeah, like all collections, you're going to get some that just don't work for a particular reader, and others that are going to get a reader pumped - and maybe one that'll make you wonder why you bothered. Your lists of each will be different from mine -- but there'll be more than enough of the good ones to make it worth your while. You may even find a new series/author to check out.