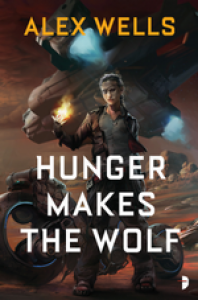 Let's just get this out there -- this is a very cool novel. If you dig SF that's not beholden to space ships and lots of future tech -- and can even handle a little bit of magic, you'll want to read this one.

Tanegawa’s World is a little forgotten backwater of a planet -- think Tatooine -- so forgotten that none of the colonists there really have a clue that there's an interplanetary government, or what's going on with any other planet. The company that runs the mines (and by extension, the farming communities that support the mines) runs the whole show. There are organizations of workers in individual towns, and there's a loose network connecting them, for mutual assistance and support. And then there are the Ghost Wolves -- a band of mercenary bikers. They are a law unto themselves, but have strong ties to the miner groups. They may be supported by/sympathized with by most people in the towns, but officially they're outlaws.

Hob Ravani is the lowest ranked member of the Wolves -- she's made some serious blunders that required her to go through the training/probationary process twice. But she's a full-fledged member now, and the leader, Nick Ravani (no blood tie, but he gave her his name), seems to trust her, even as he's still testing her commitment following these blunders. Making a routine run with a couple of other Wolves, Hob finds the body of Nick's brother lying dead in the sand, shot in the back several times. This discovery -- and the ensuing investigation, retaliation, and the side-effects of both -- will end up changing Tanegawa's World and the lives of many of its people in ways that no one can expect.

Which is not to say that this is a big, global story. It's not. This is about Hob and her immediate circle. They just find themselves (and, eventually, put themselves) in some critical areas -- and also don't realize just what they're getting themselves into. Mag, the dead man's daughter, is Hob's estranged best friend, and will be the favorite character of many readers. There are Geri and Freki -- twins who are only slightly senior to Hob when we meet them, they're not really friends of hers, but they are allies she can count on when she needs to -- and on this world, that might be more important. There's Coyote, who I enjoyed immensely, and a couple of other Wolves that we spend time with, but most aren't factors in the story. There's one more person in her circle, the Bone Collector -- I'm not even going to try to sum him up in a sentence, but he's worth getting to know.

On the flip side we have Mr. Green, who is just creepifyin' (as Mal Reynolds would say), a Weatherman (not like Al Roker) and a couple of cut-throat corporate types who just this side of wearing black hats and twirling their mustaches They are absolutely believable and not cartoon-y, but reek of "bad guy."

There is something that could be magic going on here -- it's definitely seen as magic by some. It might be radiation-induced mutation. It could be some sort of world-spirit/alien entity doing something to people. It's tough to say, and it really doesn't matter -- some individuals on Tanegawa’s World possess abilities that others don't. The ultimate cause of those abilities makes no difference to the story, it's interesting to speculate about (and to see why various groups adopt their interpretation and how they use it) -- but at the end of the day, it just means that there are a few characters walking around with extra abilities which don't define them, but are definitely helpful.

The plotting is good, the pacing is strong, and there's a strong voice throughout the work. This is just an impression -- I can't quote anything to verify it (were I a professional, I'd make the effort), but while the voice is consistent and strong throughout, I think Wells is a bit more aggressive about it in the opening chapters. In sort of a "come on strong and get you into the world" then dial back to "now here's the story." Or maybe it's "throw you into the deep end" and then let you swim undisturbed. Or maybe I acclimatized Or maybe I should stop trying to make this point and move on. My overall point on voice -- both the narrative voice, and the individual characters -- it that it was strong, clear and engaging -- the kind that you want to spend 300 pages with. Wells demonstrates the chops to keep and build an audience, if they'll just give the book a shot.

I've seen a lot of comparisons to Dune and this world -- I've never been able to get through much of the first book, and nor the adaptations -- so I can't comment. There's a lot of sand, so, I guess maybe. Tanegawa’s World feels like something out of O'Keefe's Scorched Continent or Firefly -- a mining/agricultural society in what might as well be the Old West with (some) better technology than we have. Arguably, this planet is a little less hospitable to humans and The Powers That Be are a shade more corrupt.

I've also seen a lot of talk about the biker gang aspect of the book. It didn't feel as prominent as I'd have liked -- it was there, but it didn't seem that vital to the nature of the mercenary crew the Ravani leads. If I had to compare it to anything, the Ghost Wolves felt more like a UF werewolf pack than anything else. That may say more about what I've been reading than anything that Wells wrote, still I got more of a Briggs/Vaughn/etc. vibe to the group than a Kurt Sutter-vibe. Outside of a handful of individual members, I didn't get a clear feel for the Wolves. It's understandable, Wells had a lot balls in the air and was doing just a good job juggling them that I didn't notice. In retrospect, however, I'd have appreciated a little more time with this aspect.

I feel like I've gone on too long here, but I haven't touched all the things I want to say. There's just so much going on in these few hundred pages! Despite all that, you don't get bogged down in the worldbuilding, the details, the backstories, or anything -- Hunger Makes the Wolf is a fun, fast, gripping read. I trust there's a sequel on the way. There just has to be. Not that this isn't a complete story -- there's just a lot of threads that beg to be picked up. Either way, you'll want to read this one.

Disclaimer: I received this eARC from Angry Robot via NetGalley in exchange for this post -- thanks to both for this opportunity.