Markus Novak returns and I have a hard time discussing it 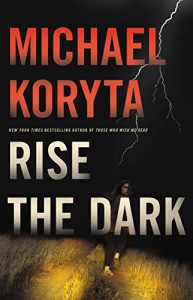 <blockquote>"If you gave Charles Mason the mind of Nikola Tesla," she said, "you would find yourself with Eli Pate. Or so he thinks."</blockquote>

I'm really kind of annoyed that Eli Pate was described this way, because I'd pretty much came up with that comparison a page or two earlier, and thought it'd be a clever thing to say.

Markus Novak is continuing the hunt for his wife's killer -- and he's starting to make progress, real progress for the first time. Far more than anyone else has in years. Markus' prime suspect has just been released from prison, so the detective now has full access to him. I think it's safe to say that the methods he uses aren't endorsed by anyone. Not only that, but he's utilizing sources that there's no way he would've trusted before his experiences in the cave in the last book. Still, there's no way he's prepared for where the investigation takes him.

Meanwhile, on the other side of the country, Sabrina Garland is kidnapped in an effort to force her husband to do the unthinkable. The way these men come together -- with plenty of ghosts from Markus' past, results in a taught, tense thrill ride. To say more about the plot would be to ruin the thing, if you ask me, so we'll just leave it here.

I really don't like most of the plot devices used here -- in any of the interweaving storylines. At least, I typically don't like them -- but Koryta pulled them all off. I bought them in the moment, and will still defend Koryta's use of them (even if I feel like a hypocrite as I've thought about the book over the last couple of months or even as I write this). I wish I could be more specific here, but I just can't.

The one exception to my plot problems is everything relating to Markus' uncle.

Where plotwise this infuriated me (while entertaining me, I need to stress), on the character front, I really enjoyed this. Most of the criminals involved were interesting and well-drawn. Markus, his new allies and his uncle were so well done. I really liked where Markus went emotionally and psychologically here. Kortya has created a great character here, and I hope we see more of him.

I'm not going to rate this one as highly as I did the previous novel, but that doesn't mean I don't think people should read this. Everything that has Koryta's name on it should be given a chance. In almost anyone else's hands, this novel wouldn't work and you'd see me trying to complain about it without giving things away. But Koryta pulled it all off, it works and leaves you wanting to return to this world.