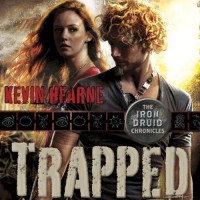 Huh. I apparently didn't write up anything when I first read this. Not only that, but I couldn't remember a thing about it. At least while I was downloading -- chapter after chapter I kept saying, "Oh, that happens in <i>this</i> book?" Some fan I am.

Granuaile is finally bound to the Earth, Atticus starts making things up to Odin, Bacchus tries to get his revenge, Vampires and Dark Elves have similar ideas -- as does a certain recently-freed Norse god. Well, many individuals seem to want Atticus dead -- preferably before he can bind Granuaile. And well, many, many other things transpire -- both positive and dangerous.

Oberon gets to be a hero, as well as comic relief. Which is all anyone can ask for, really.

The way Hearne ends this book is criminal, really -- thankfully, I didn't have to wait too long to get to the next book in the series this time through -- I put up with the months of waiting once, I'm not sure I'd have been able to do it again.

I liked the way that Hearne describes the differences between Hermes and Mercury (which carries over to all Olympians both here and the next book) -- it reminded me of some of Riordan's takes in <b>The Heroes of Olympus</b> series, while not duplicating things.

I've run out of ways to describe Luke Daniel's work -- it's just spot-on, not sure what else to say. Hearne's writing is crisp, well-paced (although I think a couple of the stories from Norse figures drag a bit), and the fight scenes here are among his best. All in all, an important and entertaining installment in this series.