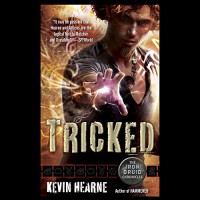 This novel is essential to pivot from the first books to the remainder of the series -- after drawing attention to himself by killing Aenghus Óg and the other shenanigans in next books, Atticus needs to disappear for a while -- but first he has a promise to Coyote to keep.

When I first read this, I summed up the book by saying, "Again, Hearne doesn't just deal with one people's pantheon--Tricked is a mashup of Irish, Norse and Navajo stories (with a side order of several representatives from other continents). Not to mention a returning cast of urban fantasy monsters, and plain ole humans. Of course, Oberon gets time to shine after being absent for so much of Hammered, and he steals every scene he's in." I think I'll let that stand for this time through the book, too.

Once again, I love listening to Daniels' Coyote -- and his other Coyote is pretty good, too (it makes sense in context, really). I've really got nothing else to say -- it's typical Daniels, fun and easy to listen to -- his narration and characters keep you listening and do a great job of bringing the story to life.

It's not the best book in the series, but it moves the overall story along, provides some good excitement and proves that Atticus doesn't need his home environs, and his readers can be entertained while he takes his show on the road (which will prove to be a very good thing for the series).