Doesn't get much better than this 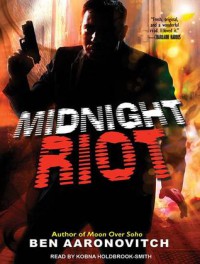 The best part about listening to this was being reminded just how good this novel was -- sure, I remember liking it a lot (if for no other reason than I've read five more plus a collection of comics), but I didn't remember it being this good.

Briefly -- in this we're introduced to a probationary constable named Peter Grant who's approached by an odd witness to an odder (and disturbing) murder. What makes the witness odd? Well, he's been dead for a couple of centuries. Soon thereafter, Peter's meets a Chief Inspector who happens to be the last wizard in England. Peter's transferred to his unit (doubling the size), taken on as an apprentice and thrust into a type of policing he wouldn't have believed existed a week ago.

The investigation into this murder turns into an investigation for several murders -- and a few other assorted crimes. Which, of course, involves diving into the history of London and brokering peace between competing river deities. That old yarn. It's a great mix of magic and police work, basic Latin and advanced bureaucracy.

Holdbrook-Smith did a fine job with the narration, very engaging, often compelling -- capturing the feel of the novel in just the way that everyone wants in an audiobook. I'd be more than happy to hear more from him.

It's dark, it's funny, it's pretty complex -- and, in retrospect, -- does a much better job laying the foundation for the series than I'd remembered. A good amount of wonder and action combined.