Back to the Soulwood for another great read 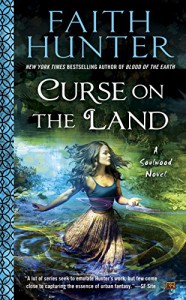 This originally appeared at The Irresponsible Reader as part of a Book Tour.

Weeks after the events of Blood of the Earth, newly-minted PsyLED agent Nell Ingram comes back from the training center, "Spook School," ready to dive into her new role. It seems she comes back just in time for a case that's right up her alley -- strange and magical things are up, and seem to be tied to land. Something big, something powerful and something no one's really seen before -- which sounds a lot like Nell. So instead of doing the grunt work, the Probie work, she's in the front of this investigation.

The presence of Brother Ephriam in the Soulwood she lives is also still around and doing something that also seems to be involving the tree on her former Church's compound. She needs to address this, she knows, but the threats to the general public and local wildlife take priority. She also seems reticent to deal with this problem and confront the actions that led to his presence in the wood, so she's glad for the distraction posed by her job.

For all the regulations and devices that PsyLED brings to the investigation of magical goings-on, I appreciate how often those things fail to do anything to solve the problem. They're helpful in guiding the agents, in informing their actions, decisions and conclusions -- but it's not the be all and end all. Throughout the novel, there's this interesting intermingling of magic and technology that's done in a way I've not really seen before (although, I think it's what Ben Aaronovitch's Peter Grant wants, but he's a long way from getting it).

Nell's continued obsession with foods that cannot be found at a Farmer's Market and her growing familiarity with pop culture (particularly movies) continue to be fun -- they ground the character as well as provide much-needed comic relief.

I think Nell could be the best new character I've read this year. She's not your typical kick-ass heroine, nor is she the (possibly more) typical damaged-yet-kick-ass heroine. She's a strong woman, determined, and stubborn. Her strength doesn't come from her magic powers, her job, or anything else. She's always been strong, but the circumstances of her life have slowly revealed to both herself and those around her, just how strong she is (from what I gather, the stubbornness and determination have been evident all her life). Which is not to say she's all strength -- she's a nurturer (not just of her plants), she's caring, and she's nowhere near invulnerable (physically or emotionally). She's also pretty clever and as her education moves beyond the solely autodidactic, we'll see that demonstrated more and more.

While this series (at least so far) is ultimately about Nell, the characters she's surrounded by shouldn't be ignored. In Blood of the Earth, Nell's embraced by her PsyLED team as part of a family, an intact and nurturing alternative to her blood-relatives. It almost seemed like an idealized replacement, but the events of this novel make it clear that it's nowhere near ideal. Several members of the team are effected by the events here in ways that will not be able to be glossed over -- both as a result of their work on the case and from arcs that carry over from the Jane Yellowrock series. The latter, I found particularly satisfying, while the former intrigue me and I'm eager to see how they play out.

We can't forget Nell's literal dysfunctional family, either. However strange and foreign they may seem to us (odd that these humans seem less familiar than the nonhumans in the books), the efforts on their part to restore and repair their relationships with Nell -- while she does the same -- are encouraging and heartwarming. Her brother, in particular, is fast becoming a favorite. Their new openness to the culture around them and the . . . lack of overt hostility and aggression to the magic and magical beings in Nell's life is great to see, while they retain much of their religious/cultic faith. I hope there are a few bumps along the path, just to make it more realistic, however.

I almost forgot to talk about Hunter's writing -- it's as great as ever. I think her use of magic -- particularly large-scale workings -- in these two books works better than it does in the Yellowrock books. Her characters, settings, dialogue, and other writerly demonstrations make this world rich and real. She's among the best and most consistent in the UF field these days and I'm eager to get my hands on whatever she's got coming out next.

I left Blood of the Earth wondering how Hunter could make this into a series --and I'm still wondering how this works long-term, there are only so many things you can do to the earth/plants/trees in an area, right? Can Nell function hundreds of miles (or more) from Soulwood? Is she much use in a skirmish between rival Vampire clans or the like? Sure, she was able to do some damage to the creatures in the first book, but at what cost? While I don't see how it'd work for a full novel (this is where Hunter proves me wrong), it'd good to see Nell acting in a more supportive role on the team -- getting coffee, filing reports, etc. -- while the weres take down some monsters, or something. I do see how these books function as a series when it comes to the characters, however -- it's just how to keep the stories/cases interesting that I don't see long-term, but I'm looking forward to Hunter educating me.

Disclaimer: I received this eARC from Roc via NetGalley in exchange for this post -- thanks to both for this. And would've received it from Let's Talk! Promotions, too, if I hadn't already downloaded it. So I guess I should thank them, too.