There's a lot of heart to this, but not much else. 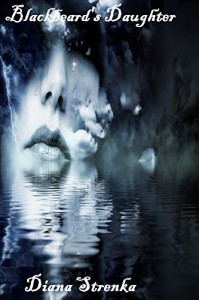 Edward Teach had a rough childhood dominated by a harsh, abusive, taskmaster of a father. He eventually grows to manhood, marries and takes over the family estate -- as soon as he can, he takes his wife and daughter to the New World and the freshly established colonies.

The focus of this story turns to his daughter, Margaret -- and she has a rough crossing of the Atlantic, and doesn't take to the New World too well. It's a dramatic time for British settlers -- battles with the natives and others disrupt the lives of the Teaches in dramatic fashion, death, injury, and loss of home and income. Margaret's world is turned upside down several times, the last time when her father starts going to sea for months at a time, only turning up unexpectedly.

She eventually learns that he's the pirate Blackbeard (not really a spoiler folks, look at the title) and goes to sea with him for a while. Almost none of this part of the novel works -- and when it ends, it's almost a relief.

There's a plotline about Margaret and her efforts to help free slaves that's sentimentally nice, but doesn't seem to ring true and doesn't really go anywhere.

I have no idea how close any of this novel comes to matching historical data, it has a ring of authenticity augmented by imagination, but I can't be sure.

Everything almost worked -- almost -- but I can't think of anything that actually did. There's an earnestness to the text that will draw you in and make you root for the author, but that's really the best I can say.

Disclaimer: I received this book from the author in exchange for this post and my honest opinion. Sorry.