An okay mystery with a supernatural twist 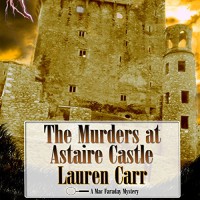 So Mac Faraday stumbles onto a haunted castle where one of his favorite authors was murdered -- as were many others -- that he just happens to own. Shortly after him finding it, more people are murdered. Just what this retired (and seemingly bored) detective needs: a complicated mystery to sink his teeth into.

The investigation brings up a lot of memories for the locals -- most particularly, his half-brother, the Police Chief. The two of them dive into investigating the murder cases both cold and red-hot. There's some good banter, some shamefully wasted cognac, a lot of antics from Mac's German Shepherd, and more twists and turns than your typical small-town murder brings along.

With murders that are this old, a lot of old memories are dredged up, so for the locals, this is a pretty messy case. Old scars, old enemies, old heart-breaks are brought back to the surface and examined.

The killer is pretty clever -- a little hard to believe, but since when aren't they? The solution was as obvious as it was outlandish -- but the trick is in the telling of the story, not in how reality-based it was. On that score, Carr did a capable job.

There were infodumps galore in the opening chapters -- mostly thinly disguised as dialogue. It's like one of the squints from Bones or the non-Beckett detectives from Castle dropped in. The recall the hotel manager, security chief, etc. had for the murders that happened over a decade ago was pretty clear and accurate. It's also surprising how little Mac knew about the murder of an author he seemed to be so into (seriously, if Steven King was murdered in a horrible fashion -- who wouldn't know something about that?)

Lawson gave us a competent narration, with odd inflections from time to time, like a NaturallySpeaking voice. The way he pronounced it made me very unclear what Mac's girlfriend's name was until I could get online and look it up.

I'm not doing a great job selling this thing -- because it's hard not to spoil anything while talking about this book's strengths -- they are there. The characters are likeable, the puzzle is good (and Carr doesn't cheat with the clues). It wasn't the best thing I ever read, but it was entertaining enough to stay with it -- an enjoyable book to keep your mind occupied while working out, doing data entry, etc. And then somewhere around the 7:45 minute mark, things fells apart for me. That last chapter just about ruined the whole thing for me. Then, the epilogue answered a big remaining question, but it was one that I'd figured out in Chapter 2 or 3 -- and I think most readers would've, too. Getting it "revealed" like that just annoyed me. Still, it seems like this one was enough of a divergent from Carr's typical mystery -- if so, the things that were the weakest parts of this book would probably not be around in the others, which would lead me to think they'd be worth a shot. Mystery fans should take a chance on this series -- even this installment.

Disclaimer: I received a copy of the audiobook in exchange for my honest opinion and participation in this tour.