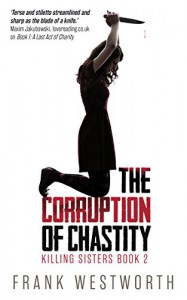 I've put off writing this one for far too long, mostly because I'm torn and I'm not sure what to say.

First, this is the second in a series and I spent a little too long at the beginning trying to get my bearings. I got there with a little work, but the new reader has to wade through a lot to suss out the events of Book One. This is not necessarily a bad thing -- just a warning for others new to the series.

This book has some pretty high highs, and a really low low.

The big high is in the suspense/espionage-like material. Chastity (and her sisters) are top-notch assassins -- although, it could be argued that Chastity has done this sort of thing a few too many times, and she's the worse for it. She's gotten herself in a tight-spot, and Stoner the burned British agent (or whatever he technically is), is hired to get her out of it. Doing so yanks him out of his retirement (living the life of a musician on a cruise-ship) and plunges him into a chase through Europe to find out who has Chastity in their sights and to stop them.

Most of the characters are doozies, strong voices, strong perspectives, troubling violent tendencies (well, troubling to most people -- but just what's needed for their situations). Not just Chastity and Stoner -- but the wide variety of spooks, criminals, military types and blues musicians we run into along the way.

There's enough twists and turns to keep the reader (and Stoner) guessing and on their toes. I wasn't crazy about one of the subplots but most of that probably comes from me not knowing the players before.

There's a torture scene that is truly disturbing (and I didn't buy the foundation for it), incidentally. The violence outside of that as pretty graphic, but (mostly) nothing too much for those who'd read this genre anyway. That's neither a high or a low, just an observation I think I should make.

Outside of the bedroom, Westworth can write -- he knows how to keep things moving, how to zig when the reader's expecting a zag (or how to execute a zag so well, that you don't care it's what you expected). When we get the character moments, the action/suspense stuff -- even the talk about music -- this book is so good, it's right up there with Finder, Child, and Sharp. And that ending? I really want to see what Stoner does next. I just hope he keeps it in his pants (ditto for everyone else).

Disclaimer: I received this from the author in exchange for my honest take on his book -- I wish my thoughts were a bit more coherent, and were timelier, but I really appreciated the book.