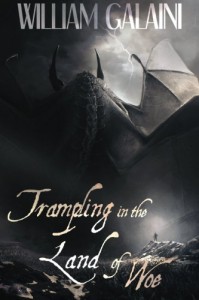 This is a well-written, imaginative book with a stack of great characters -- they have depth, individual voices and points of view. Coming up with the idea of this book is a stroke of something, I'm not sure what. I trust that Galaini's parents had him tested as a child.

How do you even give a synopsis of this? Imagine Dante's After-Life, but fuzzier on morality/religion/ethics than the Alighieri would be comfortable with. Denizens of Purgatory (and the Heavenbound) can move around from place to place (not sure if the damned can, it doesn't appear so) -- at least to "lower" levels than their own. As technology among the living advances, the dead use it, too -- but instead of regular old Steam Power, they use Hellfire -- which is a much better source of energy (for example). Living for thousands of years gives you plenty of time to refine your science.

Now, Alexander the Great's right hand man, lifelong friend, and companion, Hephaestion, has decided that Alexander's been consigned to Hell long enough and is going to liberate him. Hephaestion has been in Purgatory since his death and has spent a millennia or so preparing for his rescue mission. He's going to sneak into Hell, track Alexander down and slip out the back door. The plan goes awry from almost the beginning and Hephaestion has to rely on newly minted friends and allies to get him where he's going.

For some reason that's only made clear at the end, the Jesuits aren't fans of this, and use a variety of means (bribes, threats, assassins) to dissuade Hephaestion and his friends from their quest. Many of these assassins are ninjas. Which is just cool, I gotta say.

But man, I just didn't like it -- I didn't connect with any of the characters (there's a couple I might've been able to, if they'd been around more), the quest seemed wrong-headed and doomed at best (as at least one person tried to tell Hephaestion), and I couldn't muster up the interest to get invested. I persisted, in case he won me over (and Galaini came close), because I told the publisher I would, and I was mildly curious. My curiosity wasn't rewarded, sadly. I'm <i>not</i> saying it's a bad book -- it's not. It's not a book for me.

I'm giving it 3 because it deserves at least that objectively on merit -- my gut says to give it two, it just didn't click for me -- but it's so well-written than I have to bump it up one. I do expect many would like it more than me, and if I'd read it at some other point in time, I might have liked it more (but I don't think so).

<i><b>Disclaimer:</b> - I received a copy of this book from the publisher in exchange for my honest opinion. I thank them for the opportunity.</i>