Not your typical novel about resistance to a dystopian society 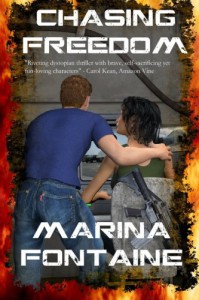 A few decades from now, the government of the United States (although I don't think it's directly called that, but it's clear that's what it is) has become the totalitarian regime so many fear, imposing a type of public "civility" on the citizenry. Public protests are closed down by the authorities, but keep springing up (and seem to be coordinated in a way that the authorities can't pin down) -- and then they evolve into organized resistance groups and information dissemination efforts (counter-propaganda efforts).

On the whole, the book focuses on the resistance groups, their allies and those they aid -- with the occasional look at those in power and their operatives. The resistance groups are full of people who are looking for different things -- some out of ideology, some out of concern for the safety and health of their loved ones, there are even criminals who help just to get under the heavy thumb of the government, some just want a way to express themselves and make art rather than be "contributing members of society."

In different ways, these people (and many others) work together (and apart) to force the government to get back to its own foundational principles. There are glimpses of violence here, but mostly this takes place between the battles -- in the ramping up to them, or in the aftermath. It's violent enough to satisfy those who want that and to seem grounded in the subject, but that's not the focus. The focus is on what the struggle means to people and what it does to them -- some characters are scarred, some characters are driven to find hidden strength(s), a few characters are both.

I noted while reading this that the type of government/society depicted in a dystopian novel tells you a lot about the politics of the author -- as does what the characters of behind the resistance/opposition want to replace it. Fontaine grew up in the U.S.S.R., and knows a little about real dystopia, that's reflected in these pages, too. Her vision of the future isn't one you typically see in fiction -- and agree with her or not -- it's a breath of fresh air.

I've read works that were better written, more convincing -- but this one hit me right. I love the vision of this book, the way that Fontaine gets her characters to work together -- even when there's little reason to. Their hopes of the good life -- or at least a better one -- really resonated with me. There wasn't (much) drive for vengeance, it wasn't one or two people against the system -- it was a variety of people, doing various things that drove the action of this novel. A solid effort, an entertaining and borderline inspirational read. I hope to see more from Fontaine in the future.