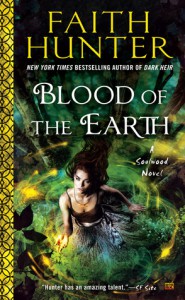 Nell Ingram had her life turned up side down by Jane Yellowrock when she came through her land on a vampire hunt. Months later, a PsyLED team -- led by good ol' Rick LaFleur -- comes to her for help and to offer her a job. Nell had been raised in a cult that seems to be involved with -- on some level, anyway -- with an anti-supernatural terrorist group who seem to be kidnapping local girls.

God's Cloud of Glory Church, the cult that Nell was raised in (and that her family is still immersed in) is involved with some petty harassment of Nell -- although some leaders are leaning more toward horrifying harassment. LaFleur, Paka and Pea help her get out of one tight spot. But that won't be enough to stop them, it did however, lead to the line: "[Pea] she looked like something out of a fairy tale, one of the old stories that was fluffy on the surface but dark and bloody underneath." Nell's magic takes a major step further in development at that point, too.

Nell coming to grips with the fact that she has some sort of magic is the heart of the novel. Well, that and her doing a better job of leaving the cult. Technically and geographically, she'd moved on -- but her mind and lifestyle are largely conditioned by the Church. Her involvement with the PsyLED team (and their crappy diet) leads to some of the most entertaining parts of the book -- her introductions to Krispy Kreme donuts and pizza are fantastic.

There really aren't that many ways that Nell and Jane are similar -- they are both deliberately and stubbornly independent, they both start out not understanding really who or what they are, and both of them are really good at ignoring the one vital, pivotal and fairly obvious thing until it's almost too late. But things kept moving well enough that I was able to ignore it (although I probably talked back at the book a lot every time this point came up).

But it's not just about Nell -- LaFluer's got a whole team with him. While he's prominent, he's really a secondary character (Paka and Pea are more so). Frankly, I was relieved by that -- I really expected this to be Ricky-Bo and his Amazing Friends -- I would've read that, but I'm not sure how psyched I was for it. Instead, Nell and the others on the team are great characters to meet and spend time with -- and I want to spend more time with them all. It'd take too much space to talk about the PsyLED team as individuals, so let's leave it with the aggregate: a very promising and entertaining ensemble.

Nell's family are a strong presence (even before we met them) and should prove to be good fodder for character growth and even future plot (I just hope it's not a well they go back to too often). The same can be said for the rest of the world we're introduced to here.

The plot involving the church, the terrorists, the kidnappings is pretty strong and moves well. The resolution is violent, but not as much as it would've been in a Yellowrock book. Nell's magic is different (and her team uses fewer firearms and knives). I'm not sure how to talk about this pre-release, maybe in book 2, it'll be easier. Let's just leave it with Nell et al. deal with things in a way that's true to the genre, but doesn't feel like every other UF around. Nell's what Atticus O'Sullivan might be without his sword (maybe).

There were two pretty glaring errors that I noticed: Nell at one point identifies someones actions as stemming from their being postmillennialist (I've never met a postmillennialist like this, I think she meant post-tribulation premillennialist) and she identifies a Biblical quotation as from Acts, when it was from Romans. There are three explanations that I can think of for this: 1. Honest mistakes that will be fixed between the ARC and official release; 2. It's been long enough since Nell's been involved in the cult and her memory for details like this is foggy; 3. It was a cult, and they've mis-educated their people. I could be convinced of #2, but it'd take some work; #1 or #3 I could completely buy.

Why do I continually underestimate Faith Hunter? It's only been in the last few Jane Yellowrocks that I pick them up with high expectations and I came to this curious, but unsure that she could do anything distinctive from Yellowrock. That ends now -- Hunter blew me away with this one, yeah, it's in the Yellowrock 'verse -- and it fits in it -- but it couldn't be more different. I'm not sure how this is a series, it's a great stand-alone, maybe a duology. But I don't see how this keeps going (but Hunter's better at this than I am, so I'm willing to believe it is one -- especially with these characters). I really want to give Blood of the Earth 5 stars, but I'm going to hold off going too far in my raving over this series until I see how Hunter follows up. Which may be stupid, but it's what makes sense to me.

Disclaimer: I received this eARC via NetGalley with major thanks to Roc, I appreciate this greatly.

N.B.: As this was an ARC, any quotations above may be changed in the published work -- I will endeavor to verify them as soon as possible.