This Asperger's Mystery is a keeper! 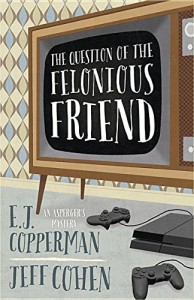 So, I don't like coming into a series after book 1 -- I've done it, and will do it again, but I don't like it. And I probably wouldn't have requested this book if I'd realized it. But I did, and I'm glad I did.

Samuel Hoenig isn't your typical mystery protagonist. He runs a business called Questions Answered -- basically, he researches things for you. A human Boolean Search. From the looks of it, this occasionally results in him playing amateur detective. Like this time, when one of the people involved in the question he's answering is murdered.

The mystery is decent. Pretty easy to figure out; my first guess was right, but I talked myself out of it -- I still like my 2nd guess, but it wouldn't have worked well. Copperman paced the story like a pro, fed you the information in just the right way, and gave enough clues for the reader to figure things out. Very well done, there.

But, like with many mystery novels, your enjoyment of this book doesn't come form the puzzle but from the characters. It's almost impossible not to like Samuel from the get-go, but it was the last sentence of Chapter 2 that probably sealed the deal as far as character goes. I had no idea about the story at that point, but character-wise it was a done deal.

It's hard to describe Samuel briefly without resorting to stereotypes. He's really smart, he has trouble interacting with most people (Mike seems to be the only exception -- but I could be wrong about that) -- his mother and associate included. His mother successfully pushed him out of his room to set up his office and business -- to interact with the world, make some money, and have the kind of life that he wouldn't were it not for her efforts. He's stubborn, determined, and once he takes on a question (and yes, like Trebek, he insists you phrase it in the form of a question), he finds the answer. He's not a detective by any stretch, just someone who answers questions. You really need to read him to start to get him.

Ms. Washburn is the Natalie Teeger to Samuel's Monk, Paige Dineen to his Scoropion -- her duties seem to include routine clerical duties, driving, and helping Simon understand/interact with neurotypicals (and vice versa). She has some personal issues going on, as established in earlier novels -- and I'm not sure what she'd be like in books where that's less of a thing. I liked her, but didn't get a great read on her.

Samuel's mother was nice, a good complement to Washburn. I also could've used a bit more of Mike, Samuel's friend (but what we were given was just the emotional grounding he needed). The client, his family and friends could've been a bit more fleshed out -- but not much. And they served the purpose they needed to. Reading over this paragraph, I guess my overriding point here is, more of everything/one would be better.

Yeah, yeah, I'm as tired as the next guy of hearing things like "The city is practically another character," or "the music is practically another . . . ", etc. But Autism Spectrum Disorder is one of the main characters in this book (I assume the series as a whole) -- I mean, the series is called Asperger’s Mysteries. Samuel's client (and some other characters) are also on Spectrum -- it's literally on every page, it's the subtext (if not subject) of every conversation, and, obviously, it colors everything Samuel says/does. It makes everything amusing/quirky -- but it's never played for laughs or just to be odd. For the record, this was his first client on the Spectrum, so every book isn't going to be so heavy on that.

As a little sample of the way his mind works, here's Samuel explaining his thinking behind the way that Questions Answered answers their phone:

Mother suggested that businesses often answer the phone with the name of the business followed by the phrase, “May I help you?” (Actually, most employees of businesses I have called ask, “Can I help you?”, which is an unanswerable question. If I am calling your business for the first time I have no way to measure your competence, and therefore cannot determine if you are capable of performing the task I need completed.) I merely say the name of the service and let the client assume we are here to help.

It's classified as a cozy (and deservedly so), and is written with a light tone (which is a neat trick given Samuel's temperament). The closest things I can compare this to is The Rosie Project, and Rick Yancey's Highly Effective Detective series. And like both of those, I appreciated the humor and the humanity of the characters, and this book is full of both. Good characters, an amusing (yet not exploitatively so) take on them, and a decent mystery -- this will not be the last I read of these books.

Disclaimer: In exchange for my honest thoughts, I received this book via NetGalley and Midnight Ink. Thanks very much!