Gets the Job Done (and that's pretty much it) 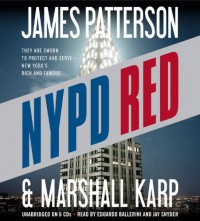 I am a huge, unabashed Marshall Karp fan. His Lomax and Briggs books are long-time favorites of mine (the best part of writing this post is that I learned that a month and a half ago, he self-published a new one! The fact that I haven't dropped everything -- including this post -- to go read it is somewhat of a shock to me). They have humor, heart, clever stories, great characters, and a crackling good voice.

I have read several James Patterson novels. They are complex, tightly written, and move at a good pace (until they get to the point where they're a little long). Yeah, I think he plays the super-smart psycho villain a bit too frequently, and that he enjoys the torture/violent aspects a bit too much. On the other hand, he sells books like almost no one else alive. So what do I know?

So when you put the two of these together, what do you get? Well, you get something that sells pretty well.

The NYPD has special task force to deal with high-profile cases, cases involving the rich, powerful and famous -- particularly with the entertainment industry (and the money it brings in). This task force is nicknamed NYPD Red (as in red carpet, get it?). It's a cushy, elite post for the crème de la crème. The crème-iest is Det. Zach Jordan, who's getting a new partner (probably temporarily), Det. Kylie MacDonald. Kylie MacDonald is smart, ambitious and gorgeous (a word that describes pretty much every woman in this book) -- and she dated Zach for a bit before she got married. Getting over Kylie has been on his To-Do List ever since.

NYC is in the middle of a big week hosting Hollywood's best and brightest, trying to get more movies and TV made there. But some whack-job has started killing bigwigs in a very public, very noteworthy way. So it's up to Jordan and MacDonald to stop them.

I have got to admit, most of the murders are pretty clever, if unnecessarily elaborate.

It was okay, well constructed, moved things well -- there's a little personal stuff mixed in, too. The killer's a very Patterson-esque killer. The cops are a watered down Karp type. I'm not chomping at the bit to get to the next one, but I'm not opposed to it, either. So, yeah, I didn't dislike it. Let's go with that.

The narration was capable, it didn't add anything to the experience -- and maybe detracted a bit once or twice. Like the book as a whole, the narrators got the job done.