Another Strong Narration in the Series 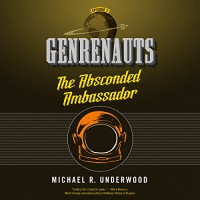 I really don't have much more to say about the audiobook that I didn't say about the original, but I wanted to get something up -- so if this seems largely familiar, it is. But not entirely ...

Working as a Genrenaut was like being a member of a theater troupe run by a burnt-out hippie who melded Devising with MBA management: the ideas were outlandish and random, but the execution was 100% corporate.

The second episode in Michael R. Underwood's Genrenauts delivers on the promise of Episode 1, and demonstrates that his special alchemy of Leverage + The Librarians + Quantum Leap + Thursday Next (just my current guess at his secret recipe) has legs -- and will hopefully go a long time.

Leah has had about a week to get used to this new reality since her adventure in Western World -- a week filled with meetings, reading assignments and trying to wrap her head around things. In the meanwhile, everyone at Genrenauts HQ is trying to prepare for the next breach (in the midst of a spike of 15% over the norm, for your corporate types), probably in Romance World. Which obviously means it'll be pretty much anywhere else, like say Science Fiction World.

The station of Ahura-3, in the space opera region, to be specific. I'm sure the similarity between the name of the station and a certain Communications Officer is a huge coincidence. Ahura-3 is everything you want in a space station -- it's a melting pot of very-alien-looking/acting aliens, it's a culture to itself, with strategic location, and very delicate intergalactic politics.

Leah's excitement about being in "honest-to-goodness, Sally Ride is my homegirl zero-g" space was infectious (especially in this format). But even more fun was the amount of SF references Underwood fit into half of chapter 1 -- truly astounding, and didn't feel forced or overcrowded. He deserves a tip of the cap right there. But the fun's not limited to the references and allusions -- it's in the alien cultural practices (and appearances), the various factions (human and otherwise), businesses, and just watching the whole Science Fiction World thing at work.

Mary Robinette Kowal did another bang-up job. I'm still not crazy about her voice for King, but I listened to this one using my earbuds instead of my car speakers and she's much easier to hear with that voice that way, so it doesn't bother me as much. I liked her alien characters a lot. Shirin and Leah are great (I think I like the audiobook take on Shirin better than the one in my head when reading, actually)

Good way to spend a little time -- very entertaining all around.