A fascinating tale of a man, a boat, and China. 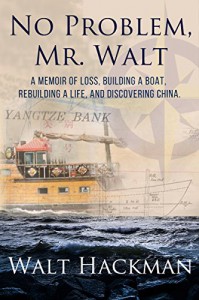 Walt Hackman led an interesting life -- sometimes, too interesting. At the age of 55, while trying to decide how to move forward from some major life changes and recover from a great tragedy, he decides to fulfill a long-held dream and move onto a boat. The question was only: what kind of boat?

He decides on a Chinese Junk. And then proceeds to figure out how to get one built for him -- not a replica, not a used Junk -- but an authentic, Chinese, made they way they've been made for centuries, built just for him.

As mid-life crises go, it's a lot more creative and original than a red Porsche. *

The process was long, involved, troubled, and confusing. Which is works out well for the reader, because it makes for an interesting story for Walt to tell. He walks us through the process involving banks, embassies, multi-national shipping, translators (professional and not), engineers, trans-pacific flights, and a whole lot of tea.

But it's not just a story about getting his Junk built -- it's a story about Hackman learning how to get things done in China, what he learned about the culture, and how he applied that. For me, this was the most appealing part (really, as interesting as it was, the boat portion of his tale was pretty straightforward).

Hackman did a lot of research into Chinese culture and history -- and shares that with his reader. You could get a quick and dirty understanding of Chinese history just by reading the little his chapter introductions. But it's not just about the big things like the Great Wall, the history of Chinese shipbuilding, various leaders, and whatnot -- he talks about culture -- the need to make sure everyone saves face in a discussion (and how to ensure that), and even Chinese singing and fighting (??) crickets -- which are sometimes kept as pets, in tiny little boxes.

It wouldn't be a book about international travel, business, and misunderstandings without some travel horror stories -- but wow, he had some doozies. Which is probably why those kind of stories are so ubiquitous, they're great bits of temporary drama that everyone can relate to. They're also great reinforcement for those of us who aren't that into travel to stay home.

Second only to travel horrors, are stories about food when it comes to narratives about other countries/cultures. Hackman described both restaurant and home-cooked meals. He gave a lot of detail about home-cooking -- both by his Chinese-American friend and her family in China. Also, thanks to an encounter Hackman had walking around and talking to strangers, I learned more about the traditional way to prepare duck than I ever wanted/needed to know.

Most of us have seen enough travel shows, documentaries, etc. about China to get the idea just how foreign a land it is to Western eyes (even The Drew Carey Show sufficiently demonstrated that), and Hackman's descriptions helped reinforce that. But more effective was his bringing things like coming home to the aftermath of the L. A. Riots (that he had no idea were happening) demonstrated the contrast with his time in China and underlined how otherworldly it can be over there (although in the age of 24-hour news cycles and smartphones, that might not be as stark now.).

It'd be easy to expect this book to be an exploration of Hackman's dealing with the emotional and familial hardships in his life -- but nope. It's just what it promises: a story about a man trying to get a boat built. That other stuff happens, you can tell, but that's not what this book is about -- part of me would've like to see how his construction project helped him find the distance or whatever he needed -- but I just found it refreshing that he didn't use this story as an excuse to deal with all that in print.

Actually, now that I think of it -- that's pretty typical of Hackman -- he doesn't share his thought process (by and large) with the reader. We don't really get an explanation for his choice of Chinese Junk, just that after some thought, he picked that. We see the results of his thinking, we see some of what his research (both via book and being around the culture) have taught him -- but we get almost nothing of the process. Now, that's a strange approach for this kind of book (at least by current standards), but it works.

The book's subtitle is: "Building a Boat, Rebuilding a Life, & Discovering China." Well, Walt Hackman does all three, but we really only get to see two of those. Building his boat and discovering China are enough to carry the book, and allow him to do the rebuilding. This is not the kind of book I normally read, but when Hackman contacted me about reading an ARC, something about it made me sign on -- and I'm glad I did. It's a fascinating book and an easy, rewarding read. Give it a shot, I think you'll be pleasantly surprised.

Disclaimer: I was provided an Advance Reader Copy in exchange for an honest review - I still might end up getting a hard copy, just so I can have that cover to look at easily (can't tell much from that thumbnail, but it's great - click through to the website and check it out).

* I'm not trying to make light of everything Hackman was going for, his crises were a lot worse than most.