Character-driven SF with a lot of heart. 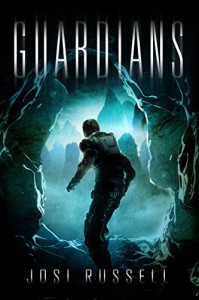 Be sure to stop by The Irresponsible Reader blog in the next day or two for news about giveaways/sales and whatnot as this book gets closer to Release Day!

I did one of those wild and crazy things with this book -- throwing caution to the wind in a daredevil-like fashion -- I read the second book in a series without reading the first book. Gasp!

Recklessness, no? It's the kind of nutty thing I used to do all the time in my youth, but haven't really done lately, so I figured I'd give it a try. Yes, there's some history (between the characters, and actual history) that I didn't really understand and some jargon that I didn't get right off the bat because I hadn't read Caretaker but with context, I got the jargon (pretty much, anyway), could piece together the history just enough to get by, so I didn't feel like I was at a disadvantage for not having experience with the series. I can say with a degree of certainty now, though, that I'm going to get to it pretty soon.

The action takes place on the planet Minea, which on paper, is run by the United Earth Government, but really is run by four Corporations and most of the populace lives in their company towns -- which, not surprisingly, act like company towns pretty much always have. What do the people who live on Minea do? Well, mostly, they mine (get it? Minea? What do you want, they're miners, not cartographers), and then there are shopkeepers, mechanics, doctors, etc. that support the miners. What they mine is this ore called Yyinum, which is this universe's equivalent of a Dilithium crystal -- it's what enables their fastest ships to travel the galaxy -- unlike Dilithium, it seems to run out and the ships need to refuel. There's only one place it can be found -- Minea.

But things aren't going so well, for the residents of Minea. Yyinum is getting harder and harder to find; there's a blight on the crops they're growing; some sort of plant is growing everywhere (like a mutant Space Kudzu or something); and a new, fatal disease is cropping up. Oh, yeah, and an unidentified alien space ship is orbiting the planet and no one knows why or what it's intentions are.

That's the overview, but if we zoom in for a closeup, we have a great cast to look at. We've got Ethan (who must've had a wild time in the last book), a government official (which means almost nothing in the company towns) who's sent on a survey mission and goes missing in uncharted -- and very dangerous -- area, with a crew of surveyors that don't like him. This is the heart of the book -- but not the most important part. There's Marcos Saras, the on-planet head of his father's mining company, trying to win daddy's approval and make a profit at all costs (the two are probably the same thing). There's Kaia -- the biggest reason I want to read Caretaker is so I can better understand her -- a brilliant engineer in a losing battle with her body. Her father, the Admiral in charge of defending the planet -- which is typically easier than it is once the aliens show up (natch) -- we don't spend as much time with him as you'd expect. And then there's Aria -- Ethan's wife, who is spurred to action after his disappearance (and after Saras' company gives up the search quickly) -- she continues the search, studies the Taim (the Space Kudzu), and tries to do something about the blight and disease (and a whole bunch of other things. If any one person understands what's going on on Minea, it's her. I'd say pay attention to her, but it's impossible not to. Mix in a whole lot of secondary characters (some of which could carry more than they're given) that add color, flavor, and a dash of romance.

The ending -- especially the denouement -- felt a little rushed, like the author was up against a deadline and just needed to finish things -- but they got the job done, and didn't seem incomplete. To be fair, if she spent a little more time with both of them, I might be sitting her accusing her of stretching things out to make a word count.

The world-building was solid. The storylines? I'm in, because even the predictable bits are done in a way to keep them interesting. You've read most of these storylines before -- maybe even all of them. But there are two elements that make this one stand out from others. The first is the way that Russell combines these storylines, weaves them together, and her weaving various characters through multiple storylines.

The second reason is what really makes me want to read the other book -- and whatever Russell puts out next -- the characters. I like these people, and even the one's I'm not crazy about are one recognizable as people, not stock characters or anything (with an exception or two). About halfway through reading this my family and I finally got the chance to watch Ridley Scott's adaptation of The Martian, *THE MARTIAN NOVEL SPOILERS TO FOLLOW* now the junior high school science nerd in me is ashamed of this, but there's a lot of what Mark Watney said that I didn't completely understand in Weir's book. But it didn't matter, because for a few days there, Mark Watney was one of my best friends. If things had gone a certain way in the book, I can tell you, I'd have been a wreck. *THE MARTIAN NOVEL SPOILERS OVER* Now, I followed 97% of this novel better than Weir's book, but at the same time, it almost didn't matter what was going on, I was into this because of the characters. The humanity with which she imbues the people, the aliens, and...well...some other things. That's the difference between this book and any number of SF novels out there.

I knew I was hooked, not just enjoying the book but was hooked, when the thing that happened about halfway through Chapter 31 made me excited and got me smiling (even if it was a pretty obvious thing that the reader was waiting for Ethan and the rest of the humans to learn). Read the book and that'll make sense. Probably.

I'm not sure when I realized this, far later than I should've -- there was almost no violence (except when the aliens and human military got going -- and even then it was pretty PG), there was no sex or "adult" language to speak of. Thanks for that, Josi Russell, what a pleasant change. On the other hand, I'm sure I ever needed the image of Minean cockroaches -- the size of an adult hand, mind you -- at all, and especially not crawling over the bodies of those killed in an accident. Shudder

A good SF tale with a lot of heart, and some characters you'll care about. That's a great way to spend a few hours.

Disclaimer: I received my copy of Guardians from the friendly people over at Future House Publishing in exchange for an honest review.