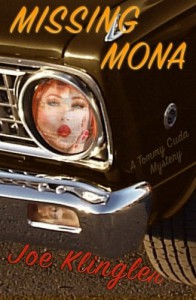 I can't put my finger on why (I probably needed to take a few more minutes between books), but the first page or two of this book really turned me off -- five or six paragraphs in, and I was already groaning at the length of this book. And then I hit the line:

Where could I find a life as exciting as a detective novel? Or at least a pop song?

Nothing special, but the second question got my attention. Tommy Kelsey might be my kind of guy after all -- the reference to The Hitchhiker's Guide to the Galaxy at the bottom of the page just sealed the deal.
Tommy's tired of being tethered to his smartphone, he's not entirely sure he wants to continue with the lady in his life, needs a break from his friends and his job, he -- actually, let me let his mother sum it up:

She held my shoulder with her right hand. “You just celebrated your last twenty-something birthday. You see the big three-oh coming at you down the long highway of life, so you want to run away to find something before old age pins you to the mat.” She smiled and let go. “And makes you cry uncle.”

Mom was okay. I didn’t think so back in high school, but she seemed smarter now.

Tommy grabs a few essentials (his guitar, some records, clothing, etc.), throws them in the trunk of his restored Plymouth Barracuda (with a 426 Hemi V8 ) and hits the road to some unknown destination. He's not on the road before too long before he picks up a hitchhiker -- a potentially dangerous move, but he's clearly in an impulsive mood -- and he's clearly attracted to her.  In an attempt to impress Mona Meyers, he says that he's a Private Investigator named Tommy Cuda (Kelsey didn't seem like a name worthy of her, and the nearby dashboard provided the inspiration he needed). Mona's intrigued by that and hires him to find someone for her once they reach Chicago.
She disappears the next day, leaving behind some money and a photograph of herself, with a note on the back:

Finding Mona ends up being pretty easy -- the challenge is in figuring out what to do with her once that's been accomplished. Not only that, but finding her lands Tommy in the middle of a web of crime, one that leads him into investigations that will involve a shooting, grand theft auto, and several other things that I can't say because they'd be spoilers, and you have to read the book anyway to believe my list -- outlandish, strange, and yet totally logical in this world.
As interesting as that all is -- and it was quite the knot to untie -- what sold this book for me was the characters, starting with the people that Tommy ends up surrounding himself with -- there's the waitress/aspiring criminologist who helps Tommy enough that you could almost say he tags along with her; the librarian/artist/personal stylist who helps him around town; the B&B employee (yeah, typical hard-boiled P.I. stays at a B&B); the coat girl who wants to be a police officer, the eccentric mechanic, a hotel valet/blues musician who can connect you with anything on the street that you need; and of course, Mona. Almost any one of these would be enough of a pal/associate for a P. I., but Klingler gives us all of these in an embarrassment of riches.
And then there's Tommy -- the poor guy who is clearly in over his head, but knows it and is doing whatever he can to find the girl, earn his money, maybe save the girl -- and play a little guitar while enjoying his new friends. Tommy reminded me a lot of Harry Lockhart, from Kiss Kiss Bang Bang, especially when he said things like,

Now I knew why private eyes in novels were always smoking a cigarette: it was nerve-wracking having no idea what was going on.

I enjoyed watching him flounder around, trying to figure out how to do this thing that he's read about and watched movies about, but is honestly clueless. about. Yet somehow -- with a little help from his friends -- he gets the job done.  Sure, the ladies threw themselves at him in a way that was tough to believe, but that goes with the genre territory.
I will read better books this year, though this was a good one -- but I will not read many that will be more fun. Missing Mona was a great ride, and I'm hoping that Tommy Cuda gets behind the wheel of his Barracuda again soon. Klingler has a couple of other books on his résumé that I'll be getting my hands on pronto, too, just to see if he has the same touch there.  Check this one out, folks, you'll thank me.
---
Disclaimer: I received a free copy of this book from the author in exchange for a fair review, which was awfully generous of him, and it's really appreciated.
Source: http://irresponsiblereader.com/2016/02/05/missing-mona-by-joe-klingler