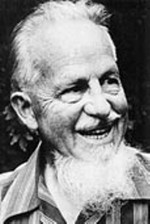 Forty years ago today, Rex Stout died at the age of 88. It doesn't take much effort looking around my blog to know that he had a pretty big impact on my life -- even if I didn't "meet" him until over a decade later -- so I didn't realize how significant the date was at the time (hey, I was only 2 at the time). Outside of Scripture and various preachers/theologians, there's a trifecta of authors who've left indelible fingerprints on my mind -- Robert B. Parker, Douglas Adams, and Rex Stout. John McAleer, in Rex Stout: A Biography, tells us:

The news today was as usual full of politicians and other movers and shakers. But the odds are overwhelming that when historians look at the bright blue late October of 1975 the only thing that will keep about the 27th is that it was the day Rex Stout died and the 28th was the day the death was reported. Rex Stout was a lot of things during his eighty-eight years, but the main thing he was was the writer of forty-six mystery novels about Nero Wolfe and Archie Goodwin. A lot of more pretentious writers have less claim on our culture and our allegiance.

That same day the latest issue of Time appeared on the newsstands. It carried a review of A Family Affair, which lauded Rex's "elastic, contemporary mind" and his capacity "to confound the actuarial tables."

Reasoner might have overstated Stout's impact on history a but, but I appreciate the sentiment.

The man lived quite a life -- for a taste, you could read McAleer's 532 page biography, or check out this obituary from The Congressional Record(!!) (thanks to NeroWolfe.org for this, and a few other obituaries).