Stone fights crime, history & his own demons in another great read 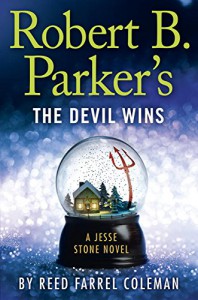 There's no good reason for me to have difficulty writing about Coleman's Jesse Stone, but I twice in a row now, I have. It looks like it'll take me less than a month to get this up, so that's something I guess (but it should've taken me less than a day!) But man, I love these books!

In this one, on page 3 there was a line I wanted to read to my wife, on page 4 I was grinning. It was so good to be back in Paradise, MA. Chapter 2 served as a a reminder this wasn't Parker's Stone, this was Coleman's. Which is not necessarily better or worse, just different -- it's still the same world, populated with the same people, it's just told differently. The Devil Wins started strong and stayed that way.

One of the things that distinguished this series from the Spenser series (and later, Randall -- which felt like Spenser) was the atmosphere -- this was a gray world (so well captured in the movies). Not just morally (and that could be argued, I think), but weather, mood, outlook on life of the characters -- economy of the community, even. Later, Parker seemed to pull back on that -- either deliberately, or for the same reason that Spenser's backstory changed. Coleman has returned to the gray, and amped it up a bit, his style brings that into focus. His dialogue might not be as snappy (and it's not), but it's thoughtful, as is the narrative and his descriptions. You can almost feel this world as much as see it.

Every town has its dark secrets, the events people don't like to remember, or discuss, or admit they happened. Paradise has a few of those, I'd wager -- one of them was that about twenty-five years ago, two high school girls disappeared without a trace. While most presumed (maybe hoped) that they'd been killed, there were no suspects, no motive, no evidence. Eventually, time moved on and the town collectively repressed the events. A fresh homicide investigation leads to the discovery of two much older bodies -- everyone assumes (and it's quickly confirmed) that it's these two girls. Now Jesse has to deal with two investigations -- one fairly low-priority, and one that is bringing back ghosts for everyone in Paradise (and is attracting plenty of attention from the rest of the world).

After putting his own mark on Jesse in Blind Spot, Coleman moves on to Suitcase Simpson and Molly. Don't get me wrong, this is still Jesse's book, and his presence dominates the narrative. But it's in these pages that Coleman plants his flag on Suit and Molly. Suit is possibly at his most self-aware here, almost dying can do that to a person (making Coleman's tweak totally justified), we don't get as much time with him as we do with Molly, but what we do is golden. More importantly, Jesse has to be honest with himself about Suit -- and that clarity will drive their relationship going forward. If Coleman hadn't delivered with the rest of the book, but had with this? It'd have been worth it.

Parker, Coleman (and Brandman) hadn't given us too many details about Molly outside of her outstanding work as Jesse's conscience, aide, and friend. We got the little fling with Crow, and some references to her family, and that's it. Which is exactly the way that Officer Crane wants it. But sometimes, you can't keep that wall between your personal and professional as high as you want to -- sometimes the past comes back to haunt you -- and it does in spades for poor Molly. In the end, we don't learn that much about her that we didn't know, but it's easy to see how what Coleman shows us helped shape her into the woman she is. (Minor spoiler ahead, skip to the next paragraph if you want) One of the two girls was Molly's best friend, and by all rights, she should've been with her the night they disappeared. The discovery of the bodies, what they learn during the investigation, shake the seemingly unflappable Officer Crane to her core.

One more reason for her boss to take care of business. Not that he really needs it. Especially when more bodies start to show up.

Best part of this book for me? There's no Gino Fish. There's no deus ex mafia providing the solution for Jesse. It's procedure, dogged determination and criminal stupidity -- plus a little dumb luck that helps Jesse conclude what happened twenty-five years ago and today.

In addition to the great character work with our old friends, we get to focus on three new friends of Jesse's in this book -- two of whom are long-time residents of Paradise that we haven't encountered yet, one is new to town. Jesse enlists the assistance of the editor of Paradise's newspaper with the historical elements of his case (the police files were not up to snuff) in exchange for exclusives on a story starting to get some national attention. An insurance agent/city councilman who has been Jesse's biggest supporter in Paradise's government encourages him to keep on track and solve the crimes in a hurry (and when that fails, turns to threats). There's a new Medical Examiner in the area (whose departure from NYC is similar to a certain LAPD detective's) who befriends Jesse -- she's smart, attractive, and interested in more -- but for now they decide on friendship.

I guess I should quickly mention the other women in Jesse's life, having talked about Tamara Elkins. She's talked about a couple of times, but we don't get to see the new character from the Blind Spot, Diana Evans, which is a shame. I hope that changes soon, Coleman certainly leaves the door open for it, although Coleman's going to have to start using surnames that don't sound so similar. I thought Jen was around juuuuuust enough for my taste (I also appreciated the talk about Sunny Randall).

I find it amusing how many people I've seen complain about Jesse's drinking being talked about so much. His battle with the bottle was a focus from Day 1 -- sometimes more successful, sometimes less so -- but always, always a presence, often discussed no matter if he was drinking or not. It's there, it's looming, Stone battles it as he does the rest of his demons (the "it could have been" of baseball, and Jen) -- while doing what he can for these girls and the community.

Once again, Coleman strikes the right atmosphere and mood, captures the essence of the characters -- while not keeping them frozen in amber, tells a very Parker-esque story in his own manner, and makes me seriously consider moving to a fictional Massachusetts town, despite the troubling homicide rate. It wasn't as good as his first foray into this world, but I'm not sure it could've been, and it was close enough to justify reading it a few times anyway. Please, sir, I want some more.