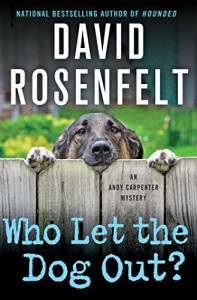 As Michael Corleone said in The Godfather, Part Ill, "Just when I thought I was out, they pull me back in." The fact that it was the worst movie in the history of movies does not take away from the truth of that statement, as it relates to my legal career.

Poor, beleaguered Andy Carpenter.  Dragged, kicking and screaming back into the courtroom to defend someone he really doesn't care about, but by doing so he gets to investigate a crime he's really concerned with.
As we all expect, that crime involves a dog.
The Tara Foundation, the dog rescue shelter that Andy runs with his former client, Willie, is broken into.  The thief does a very professional job and takes off with one dog. Professional or not, the thief didn't take into account how devoted Andy and Willie are to these animals and how obsessive they can be about them.  It doesn't take them long at all to track down the dog...and the corpse he's next to.
Andy wants to know more about the dog, and the dog's owner who turns out to be a fugitive, suspected of murder. The only way he can keep his foot in this case is to defend the man accused of the killing. He eventually does figure out who kills the thief, but it's almost accidental -- it's certainly incidental to anything else going on.  Just one of the little bits of pleasure this provided was that "ah ha" moment.
During the trial -- the stage of many of this series' highlights -- Andy treats us to an amusing clinic on all the ways that a couple of lawyers (and people in other professions) can use the word "frankly," including all the shades of meaning that word can provide. Like so many of Andy's lessons, this was worth the ticket price.
Rosenfelt brings us yet another storylines that could summed up as: It looks like a simple crime, but is actually the linchpin to uncovering a major terrorist plot/international crime syndicate (minor spoiler that if you read more than a couple of chapters you'd see for yourself). I'm getting a little sick of these. The terrorist plot, by the way, makes me reconsider the plausibility of a similar plan in Robert B. Parker's Night Passage.  I'd always thought that the weakest part of an otherwise compelling read, seeing it now in light of this book makes me think there was something there.  Still, for crying out loud, Mr. Rosenfelt, let major criminal enterprises and terrorist organizations figure out that a trip through Patterson, NJ is asking for trouble.  Local conspiracies, okay.  But major international conspiracies?  You've got to stop going to that well so often.  Or period.
My other worry about this is Ricky.  If you haven't read this far in the series, you may want to skip the rest of this paragraph. About half of the material around Ricky was cute and fun -- just like it was in Hounded.  The other half (mostly involving stale sit-com like bits about kids' sports) teetered on painful.  I fear that this series might be like the older comedies who felt compelled to add the cute little kid late in the run (Andy on Family Ties, Cousin Oliver on The Brady Bunch, Olivia on The Cosby Show, Chrissy on Growing Pains, etc., etc., etc.).  If that's the case, I worry about the future of the series.
Don't get me wrong -- I enjoyed this overall. I can suspend my beefs with this series as it goes on and enjoy Andy's laziness, his awe of Marcus, Marcus' awe-inducing self, the hacking seniors, and all the rest.  I don't open up an Andy Carpenter novel expecting to be hanging in suspense, to be chilled, to be challenged in any way; I expect to spend a couple of hours in some pleasant company and sometimes to get a fun puzzle.  In that sense Who Let the Dog Out? delivered enough.
Source: http://irresponsiblereader.com/2015/09/08/who-let-the-dog-out-by-david-rosenfelt