Not Quinn's best, but still a fun read 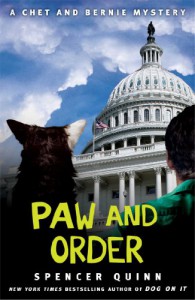 On their way home from their adventures in Louisiana, Bernie decides to take a detour through Washington, D. C. to see if he can repair some of the damage done to his relationship with Suzie Sanchez.

I'm not spoiling much to say that Bernie's romantic gestures and intentions are still only slightly better than his financial moves -- making this both the most interesting (and frustrating) part of the book.

Shortly after their arrival, Suzie brings Chet along to help with a story, and they end up finding the body of a friend/source of Suzie's. Making things more complicated, Bernie's implicated in the shooting. Despite not being on familiar turf, the trio dives into the investigation and the murky international political waters surrounding the capitol.

If you ask me, the solution to the mystery is a bit too easily found. And, thanks to Chet's comprehension of human beings (and lack of exposure to all the evidence), I felt like I had to fill in more blanks than I'm used to with the series. You may differ, but it left a bad taste in my mouth. But even if I didn't like the destination, taking the trip with Chet's narration was as pleasant as usual.

We get a bit more detail about Bernie's military past than we did before -- building nicely on The Sound and the Furry, and obviously, there's movement on the relationship front. Which, for this series, is plenty of character development. Chet remains Chet -- not sure what character growth would look like with him, nor that I'd want to see it, anyway. Oh, wait -- there's a new trick that Bernie does with him.

Honestly, this was probably the least of the series -- I'm not sure if Quinn was over-reaching, or just didn't have enough to flesh this out. He seems enough of a pro that I have trouble believing either. I'm not going to take the time to make the case (either way), because I don't think it's worth it. There was enough to enjoy here, and while there were plenty of negatives, I don't think they outweighed what was enjoyable. Just hoping for a good rebound with the upcoming Scents and Sensibility.