It infuriates me that I haven't written anything on these books -- Ceepak and Boyle (and, probably, Grabenstein) deserve better.  But...here's something, at least.

The points I've had all along are still here -- I like Grabenstein's voice and tone.  I like the subtle character growth.  Ceepak is a super-hero.  Danny, on the other hand, is the real star of this series (no matter what it's called) -- we're watching him grow in to a real cop, into a man.  Yes, he's trying to model himself off Ceepak, but he's the focus, he's our entry into this world and Ceepak's mission.
The biggest problem with this series is that I just can't bring myself to listen to enough Bruce Springsteen to appreciate all the references.  I've tried.  Really I have. 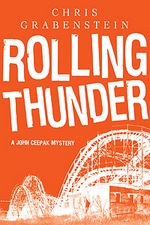 Series:John Ceepak Mystery, #6
Hardcover, 304 pg.
Pegasus, 2010
Read: November 24 - 25, 2014
Not much worse than a prominent citizen dying on the initial run of the new Roller Coaster that was supposed to guarantee one of the best tourist seasons in recent years for Sea Haven.  The resulting investigation is as filled with the typical twists and turns, heroics from Ceepak and good tries from Danny.
Not that Danny doesn't get his chance to shine -- and brightly, I should add.
I liked this one, not as much as I wanted to, but spending time with good friends in NJ is always a treat.
I'll take a moment to say that I'm not crazy about the whole arc about Ceepak's father.  Initially, I liked it -- but now?  I don't know -- maybe they're just spending too much time with it without resolving anything, but I'm done with it.  There's another arc kicked off here that works much better (particularly as it's a subtle kick-off here, that grows into prominence). 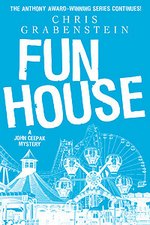 Series:John Ceepak Mystery, #7
Hardcover, 336 pg.
Pegasus, 2012
Read: February 25, 2015
A competitive version of The Jersey Shore comes to Sea Haven, and with it comes chaos, attention, and gobs of money.  Oh, and because this is Sea Haven -- murder.
We're treated to a nice bit of social satire/cultural commentary along with our usual Ceepak/Boyle antics.  Sure, it's at the admittedly easy targets of The Jersey Shore/"Reality TV" in general. Still, it was fun, like this little bit about the host of just before a commercial break:

...teases Chip, because they like to do that a lot on these shows: hint that something good is coming. In fact, they do more hinting and teasing than actual entertaining.

I've had the same thought (not as well-articulated) more than once and appreciated someone else saying the same thing.
I also liked that the book starts with drunk and disorderly charge and then an investigation into anabolic steroids. Not every book (especially those set in small towns) has to be about murder or serial killers, right?
Overall, one of the weaker entries -- but the TV commentary and Danny's personal story made up for it. 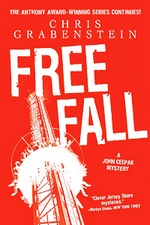 Series:John Ceepak Mystery, #8
Hardcover, 352 pg.
Pegasus, 2013
Read: March 11 - 12, 2015
Sure, there are draw backs to having a mystery series in a smaller town - at some point the crime rate gets ridiculously high, for example. On the other hand, when at least one of your characters has known half of the victims/suspects/witnesses all their lives, you can save a lot of time getting to know them finding narrative hooks, emotional ties, etc.  That helps a lot here.
There's something to this murder -- this victim that doesn't seem like the typical Ceepak/Boyle case.  Same with the motive, really.  I really liked the characters, the murder, the way this pushed our protagonists in different ways.  If this wasn't the best mystery -- the best book in the series, it's the best in a long time.  Hope it's a sign of things to come.