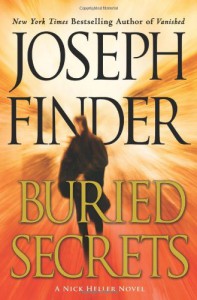 Private Spy, Private Investigator, Private Vengeance-Taker, whatever you want to call him, Nick Heller one of the best -- he's tough, he's resourceful, troubled kids like him and he quotes The Punisher.  Who doesn't love that?
Heller's relocated himself, his computer wiz, and his nephew to Boston since we saw him last, setting up shop marketing his peculiar trade.  True to form, he's pretty picky about who he accepts as a client, but there is one who he can't turn away.  Marshall Marcus, the richest man in Boston, was a lifeline for Heller's mother after his father's prison sentence was handed down.  Now he needs a lifeline -- actually, his 17 year old daughter does.  She's been kidnapped and will be executed if her father doesn't give the men responsible exactly what they want.
The kidnapping itself, and the way Alexa is being held captive aren't that novel -- most readers who've watched a police procedural or two in the last few years will have seen one or two scenarios like it.  But Finder does make it distinctive by making the man holding her into a particularly sick and evil man.   Thankfully, we don't spend so much time with Dragomir that the reader sympathizes with him, or starts to like him (à la Dr. Lecter).  What he's doing to Alexa is just wrong -- as is pretty much everything that has led up to this point in his life.
Nick's not just up against this twisted man -- and those behind him -- he also has to contend with a client who continually lies to him, an FBI official that seems to be blocking his efforts, and more than one person who isn't who they say they are.  Thankfully, he has Dorothy, his old military friends, international intelligence contacts, and a different FBI agent backing him.
There's less action (as defined by explosions, gunplay, fights, etc.) than in Vanished, but it's more suspenseful.  In Vanished, it wasn't until the closing pages that you had any idea what was happening with the victim -- but here, there's never any doubt about what's going on with her, and what's going to happen to her if Nick doesn't put the pieces together.  Soon.  Which isn't to say it's all-thriller-all-the-time, there's moments where Nick and the reader catch their breath.  Even a couple moments of levity (Nick's narrative voice helps a lot on that front) -- his observation, "Veganism is apparently the paramilitary wing of vegetarianism" helped set the tone.  Dorothy's eventual use of the word "Pepsi" to close a chapter made me chuckle audibly (you'll get it when you read this).
I should probably add that this book includes one of the grosser character deaths I've read in the last couple of years.  Didn't bother me much, he had it coming.
We get to see a bit more of Nick's life and backstory this time.  He's a better-rounded character now.  It'd have been easy to see him as a workaholic who had no contact with anyone outside of work and his nephew before.  But that's clearly not the case now.  There's not much more to him -- but there used to be, and getting that glimpse helps you care a bit.
It's taught, it's a page turner, it's a "I can always sleep later" kind of read. Man, oh man, I hope Finder has at least one other Heller adventure up his sleeve.
Source: http://irresponsiblereader.com/2015/05/14/buried-secrets-by-joseph-finder