This Trilogy Saved the Best for Last 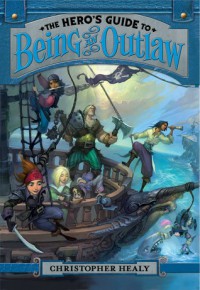 I started talking about the last book in this series by noting that it wasn't as good as the first.  So I should start off here by noting that this is at least as good as the first book.   It's somewhat criminal that after reading 900 or so pages of this before that I didn't mention Todd Harris' art work.  The covers are great, but the interior art is what seals the deal.  It's the perfect match for tone and content of writing.  Not since Mary GrandPré decorated the Harry Potter books (maybe you've heard of them), have I enjoyed illustrations in a book so much.  He's at his best in these pages.
Following the events of Storming the Castle, our friends have scattered, (for the most part) returning home and to their lives as they knew it.  They've had a rough go of things the last couple of years and have earned a little normalcy.
Until bounty hunters show up hunting them.  Which tends to shake things up.
So it seems that that Brair Rose is dead -- killed.  And who else would anyone suspect but the League of Princes and the Princesses so closely associated with them?  So large bounties were put on their heads, and they'll need all the skills, courage, panache and dumb blind luck they can muster to evade capture and find the people truly responsible.
Meanwhile, the villains that the League, etc. were sure had died at the end of the last book?   Yeah, well . . . maybe not.  Put the two of these storylines together, add in some pirates, bards and a ghost and you've yourself a heckuva read.
Like the best kids' entertainment, this includes a few reference and jokes fit for adults while sailing right over younger heads (without slipping into innuendo).  My favorite example was when the (however temporarily) imprisoned Princesses met the imposing woman Val Jeanval who stole a baguette in order to use it as a weapon.
I started to list off all the goodies this book contains, when I realized my list sounded like someone else's, so I'll just borrow Grandpa's: "Fencing, fighting, torture, revenge, giants, monsters, chases, escapes, true love . . . " throw in pirates, ghosts, and witches and a lot more royalty than that other book, and you've just about described this.  It was a fun series, with a fittingly great end.  Grab it for your kids, and when they're not looking (if they won't share), give it a read yourself.
Source: http://t.co/BtsKKRqPlc