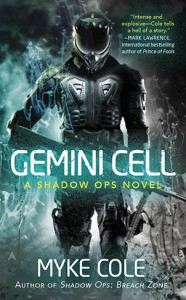 He started off strong three novels back, but Myke Cole is one of those authors who gets discernibly better with each book (I assume that will stop at some point -- not that I'm in a rush for it), and this one seems like a major step beyond Breach Zone. So when I say this is a well-written book, I mean really well-written. But man, I really didn't enjoy this book. It's not his fault, well, let me rephrase it: it's not Cole's abilities or voice this time. I don't know what it is. I guess I just don't like the story or the characters all that much, as skillfully as they're delivered to us?

Early on in the Great Reawakening, years before (possibly many) the Supernatural Operations Corps is in full swing, the U. S. Government has begun to use magic resources for its own ends (and, presumably, other nations are doing the same). One of these resources is a magician who can take the recently killed and unite their body and mind (slash soul?) with the mind (slash soul? again) of a long-dead warrior to create a Firestorm-like entity to use as the ultimate special-forces operator. Because somehow, this union gives them super-strength and abilities, while not feeling any pain or bleeding. As they're technically dead, they can use them for anything, and if things don't go right on the mission -- oh well, what's one more corpse? It's a little more complicated than that, but that'll do for now.

So, we have Jim Schweitzer, loving husband, doting father, and SEAL. His professional artist wife, Sarah, doesn't fit in with the other Navy wives, and is really tired of not knowing where he is, when he'll be called upon for a mission, and so on -- puts her foot down. Family or Team. Just as he's about to choose, a hit squad of people who shouldn't know who he was, somehow find out and invade their home, wounding Sarah and their son and killing Jim. Giving the magician a fresh subject. Jim turns out to be one of the best (if not the best) of this reanimated soldier project, partially because he holds on to his humanity and memories better than most.

Sarah and Jim's team member Steven, grieve his death (unaware that he's not totally dead) and support each other in this time -- while trying to figure out just what happened to his body, which is mysteriously not available for burial.

There's one character we spend far too much time with given what happens to him/her by the end of the novel. One character who might as well be twirling a mustache in a couple of scenes. Mostly, everyone is this mix of motives, morality and action which are probably intended to depict the gray-ish nature of us all, but frequently come across as the products of an indecisive narrator. Jim battling his new soul-mate for control is just the most obvious example of the good vs. bad in all of us.

Cole explores similar themes to his past work -- how honorable people/soldiers can function in inherently less-than-honorable conditions and systems. Who, ultimately, do soldiers fight -- and why they do so. Cole's said that this is to be a not at all subtle metaphor for PTSD, and I can see that -- I'm just not sure it's a helpful one (yet).

While I said Cole's at the top of his writerly game, this isn't a perfect book. At least once, he repeated a metaphor within a couple of pages (I don't normally get that picky, but that one really took me out of the moment). And his sex scenes? Not good. They're not Tom Wolfe bad, don't get me wrong. But they read like . . . exactly like a sex scene written by a guy who's better suited for describing Special Operations forces eliminating high-value enemy targets.

My major beef with this book is the magic. We're four novels into this world by now, and the previous three have established some pretty clear rules for magic -- at least the types of magic usually displayed in the U.S. But it's clear that there might be variations throughout the world. So, it's believable that we'd find another type of magic here. Also, this takes place quite a while before the Shadow Ops series, so changes may have occurred between now and then -- if magic can appear and reappear, it can evolve, right? But it still feels too different (realizing I might have misunderstood this book, or the three others) -- particularly the different (deeper?) magic that comes into prominence in the final chapters. I'm not saying there's not a decent explanation for this, there very well may be -- but given what we know about the universe this just doesn't work. Which shouldn't take away from the really strong and effective way that Cole used this bending/breaking of his own rules, because the last couple of chapters were great.

See what I mean? I can't decide what I think about Gemini Cell -- and I've been thinking about this for a couple of weeks, started writing this three days ago (you probably can't tell that a lot of effort was put into this, but trust me). At this point, the only thing I'm sure of is that I'll be back for the sequel, Javelin Rain, and hopefully that'll wash all this away.