A Fun Super-Powered Follow-Up to Steelheart 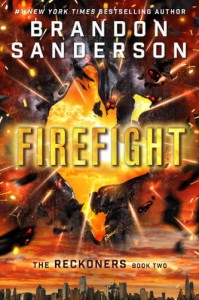 This time, when she'd pointed it at me, she'd flicked the safety on. If that wasn't true love, I don't know what was.We've all been there, right?
In the months since David did the impossible by killing the Epic Steelheart, he and the rest of the Reckoners have continued their war against the Epics -- successfully enough, that Newcago is beginning to rule itself (sure, with the puppet government that Steelheart allowed, but it's starting to come into its own).        The last few of these have been sent by the Epic that runs Babilar (Babylon Restored = Manhattan), Regalia.  So, David, the Prof, and Tia leave the rest of the Newcago crew to keep order, and head to Babilar to see what they can do about Regalia.
Meanwhile, David's trying to convince the Reckoners that Megan wasn't a traitor and murderer, and while an Epic, she deserves a second chance.  And not just because he's gaga for her.

It's possible that the city of Babilar is the happiest city in contemporary YA dystopias.  It's definitely one of the most upbeat depictions of Manhattan that I've ever read/seen.  Which is saying something, considering that it's pretty much flooded (and ruled by an Epic who can control water).  But thanks to a religion/philosophy/frame of mind (depending who you ask) -- possibly Epic-induced, possibly spontaneous -- the people of Babilar are a lot more positive, have a certain joie de vivre, and are a lot less interested in the work of the Reckoners than anyone else we've heard of in this world (and poor Dave is rather befuddled by this).  I don't want to get too descriptive of it -- Sanderson will do better than I ever could, anyway -- so let me leave it with this: I'm not crazy about the water, and I might be persuaded to move to Babilar.
One thing I'd forgotten from Steelheart was Dave's general goofiness and voice.  I did remember how bad his metaphors were (paricularly, as it was pointed out to him that they aren't even metaphors at all), but I didn't remember how fun Dave was as a character when he wasn't being more driven and vengeful than a teen-aged Bruce Wayne.  Maybe Sanderson didn't stress it as much last time out, or given Steelheart's death, he's lightened up.  My guess it was a failure of my memory -- but I really enjoyed Dave's voice here (think Peter Parker à la Bendis), and would've kept with the book just for it , even if I stopped caring about the rest of the story (little chance of that happening, I should say).
But even with Dave's snappy narration and Babilar's vibe, there's a lot of suspense in Firefight.  A lot of deception, treachery, and danger everywhere.  In the brightest of moments lurks a real possibility of the world becoming a darker place than it has been since Calamity and the advent of the Epics.  Sanderson attempted a real balancing act here, and pretty much pulled it off.  Up to, and including a great cliffhanger that makes the wait for the final volume of this series all the worse.
The only other note I can think to say here is that Sanderson has the most creative use of Fortune cookies in fiction here.  Inspired.  Read it for yourself.
Fun, fast-paced, exciting tale of super-powered dictators and the people resisting them -- give Firefight a read if you've already enjoyed Steelheart.  But go back and grab Steelheart first if you haven't.
Source: http://t.co/3NyQ9ji3Ha
Brandon Sanderson Steelheart Reckoners