A Promising Start for a Fun New PI 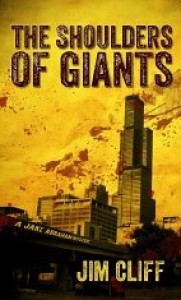 "I grew up watching The Rockford Files, Magnum P.I., Vega$. Bogart films like The Maltese Falcon, and The Big Sleep, led me to books by Hammett and Chandler. Most of my formative years were spent in front of the TV or with my head in a book. I was realistic about it, though. I didn’t think my life was going to be like some hard-boiled airport detective novel, but I was always good at solving problems, thinking laterally and logically, and it seemed like something I would enjoy."

This is how Jake Abraham describes his career choice.  Jake describes a lot of us there -- but where I fantasized about becoming a mystery novelist, Jake wanted to live the novels.
This is where his career starts -- a disgraced former police captain hires Jake to find his missing daughter (not surprisingly, Capt. Patterson doesn't think his former pals in the Chicago Police Department are going to be overly sympathetic).  Jake throws himself into this with every bit of gusto he can summon.  Which is a lot -- thankfully, he's more than just enthusiasm.  Jake's smart, educated, and (pretty) disciplined -- which serves him well.
The case gets pretty serious pretty quickly, and it's not long before a missing college girl sounds a lot better than what Jake has to deal with.  While investigating her disappearance, the rookie P.I. comes across a few other criminal activities -- some of which he observes, some of which he helps the police with, and some of which happen to him.  These keep the main story from being a simple series of rabbit trails and red herrings and also reveal a good amount about our hero.  From a plot-standpoint, this isn't a great novel, but it's good enough to stick with.
Jake has a long friendship with a CPD detective who helps him (both purposefully and inadvertently) more than he should, which really helps Jake through some of the understandable stumbles he makes out of the gate.  He also makes some really convenient new friends along the way that make it possible for Jake to make progress with some investigations, and even resolve a thing or two.  Not the greatest supporting cast -- but largely interesting and people I wouldn't mind spending more time with.
Jake reminds me of Lee Goldberg's Harvey Mapes (from The Man with the Iron-On Badge/Watch Me Die) -- but Jake's got his act more together, even if he and Harvey are drawing inspiration from the same sources.  I like Jake.  I actually like him better than I like the book, but as long as you like the protagonist like that, you can keep reading a mediocre book (and this isn't mediocre, actually -- it's pretty good, just not as good as Cliff will be writing 4 books from now).
Jake has a nice dry wit, like many of the P.I.s he wants to emulate.  Lines like

The third number produced nothing. I wasn’t very surprised, sixty percent of Americans have unlisted numbers. There are a lot of paranoid people out there, and it just makes it harder for the rest of us to find out who they are, and where they live.

make sure that this is an enjoyable read.
A fun character off to a promising start.  I look forward to reading the next in this series.
Source: http://irresponsiblereader.com/2015/01/29/the-shoulders-of-giants-by-jim-cliff